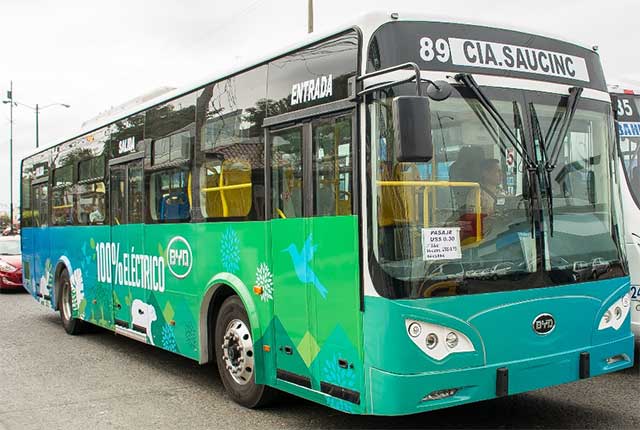 Private bus operator Saucinc, and BYD, have closed a sales deal of 20 electric buses for Guayaquil; the first electric fleet in the country and the second of Latin-America.

Public bank, CFN, will finance the purchase of 20 buses and complete charge system, with a total cost of USD 7.7 million.

Saucinc is a private bus operator from Guayaquil, Ecuador, that has been seeking to modernize its fleet with electric technology. After 5 years of research, they signed a credit of USD 7.7 million with CFN for the purchase of 20 electric buses and their charge system. BYD, the world leader in electric mobility and green technology, is manufacturing the order of 12-meter buses with a passenger capacity of 80 people per bus. By March 2019, Guayaquil City will have a zero emissions fleet with features such as air conditioning, WIFI and increased comfort for the driver, promoting the modernization of public transport in Ecuador.

The electric bus had a real operation test period in Guayaquil City between November 2017 and March 2018, with an average range of 250km per day. In total, 72,000 people used the electric bus. It is estimated that this 20 eBus fleet will avoid the emissions of 12.8 tons of CO2 and consumption of 2.9 million gallons of diesel over a year’s operation, achieving savings of USD 8 million for the Ecuadorian government, who are currently subsidizing fuel oil.

The Municipal Transit Agency of Guayaquil supported this private project considering the acceptance it had among users, after they created a poll to measure their appreciation of the service. 85% of the users approved the new technology and a new ticket rate for zero emissions transport, air conditioning and new buses.

BYD technology will give the drivers a comfortable work place and increased road safety, with features such as speed limit control via software, and cameras inside the bus.

Guayaquil will become an electric mobility leader in Ecuador with the first electric bus fleet and the first fast charge station. This charge station will also provide energy to an electric taxi project that is to be confirmed in 2019. Following Santiago, the capital of Chile, which currently has a fleet of 100 buses, Guayaquil is fast becoming a referent in the South America region for zero emissions public mobility.