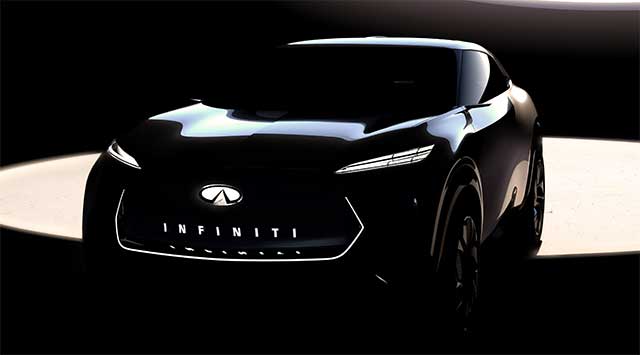 INFINITI will preview a vision for its first fully-electric crossover at The North American International Auto Show (NAIAS) in Detroit in January, revealing a new form design language for electrification, infused with Japanese DNA. INFINITI made its global debut 30 years ago at the NAIAS.

The advent of electrified platforms heralds a fresh approach to what crossover and sedan platforms look like, both inside and out. With new exterior proportions, electrification also gifts interior space, enabling spacious, and lounge-like interiors, rich in welcoming and assistive technologies.

In January, the company announced INFINITI would electrify its portfolio from 2021 onward, using either e-power (serial hybrid) or pure EV powertrains.

“Thirty years ago, as a 24-year old designer in the audience, I saw the birth of INFINITI in person and am proud to be part of the journey of creating iconic luxury automobiles,” said Alfonso Albaisa, Senior Vice President for Global Design, Nissan Motor Co. “Now, 30 years later, Q Inspiration shows how new proportions triggered by the new electrified power of INFINITI has inspired a new direction, a new visual language. Alongside our Prototype 10 Pebble Beach Concept, both designs embody a deep simplicity inspired by the technology within and a new artistry inspired by our unique culture and of course our roots in Japan.”

The Q Inspiration, revealed at the 2018 NAIAS, and Prototype 10, seen at the 2018 Pebble Beach Concours d ‘Elegance, both provided elements of a futuristic design language. At the 2019 NAIAS in January, these elements will come together to provide the clearest vision yet of the future of INFINITI in an era of electrified design.

“The concept car we will show in Detroit is the beginning of a new era for INFINITI, and an illustration of where we want to go with the brand. Electrification and other new technologies have given us the opportunity to evolve our design philosophy,” said Karim Habib, Executive Design Director, INFINITI.

“The industry is at a technological inflection point,” said Roland Krueger, Chairman and Global President of INFINITI Motor Co. “As such, INFINITI has a compelling vision as a luxury challenger brand to bring a full portfolio of beautifully-designed electric vehicles to customers around the world. We will focus on developing the full portfolio of e-power and EVs.”