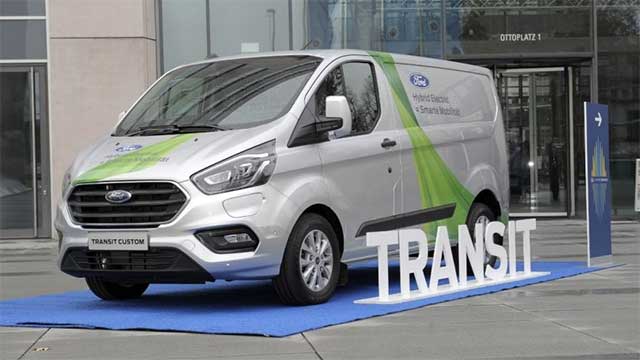 Ford is to expand its exploration of the positive effects that the use of plug-in hybrid electric vehicles (PHEVs) can have on cities, by commencing commercial vehicle trials in Cologne, Germany.

From spring 2019, Ford, supported by the City of Cologne, will operate a fleet of 10 Ford Transit Custom PHEVs with regional companies in the city to investigate the extent to which PHEVs can help to achieve urban air quality goals. Funded by Ford, the trial will initially run for 12 months, in cooperation with municipal fleets serving the public sector, complementing testing in London and Valencia, in Spain, with larger fleets and small-to-medium fleets respectively.

“Ford recognises Cologne as a city of strategic importance regarding future mobility. Together with the City of Cologne, we will start to investigate how we might in future look forward to urban areas that offer better air quality and can also be more productive,” said Gunnar Herrmann, chairman of the management board, Ford of Germany.

Ford announced the new trial at its “City of Tomorrow” symposium, in Cologne, which brought together thought leaders from the private and public sector, including urban planners, political decision makers and mobility experts, to discuss a common vision of the future of urban mobility.

“For the rapidly growing city of Cologne, emission-free mobility is a crucial issue for the future. Every research project that works towards this will benefit our city. I am glad that Ford, as an automotive manufacturer, with its European headquarters in Cologne, will undertake this trial,” said Henriette Reker, Mayor of the City of Cologne.

The Transit Custom PHEV has an advanced series hybrid system that targets a zero-emission range exceeding 50 kilometres (31 miles). This makes it ideal for the use in city traffic. As a range extender, it features the multi-award winning 1.0-litre EcoBoost petrol engine that charges the on-board compact liquid-cooled lithium-ion battery pack as required to offer a total range of up to 500 kilometres (310 miles). The batteries have a storage capacity of 14 kWh and the installation of the battery pack under the load floor preserves the full cargo volume of the standard van. The front bumper offers a connection facility to fully charge the battery within three hours via a 240-volt power supply with 16 or 32 amperes.

All partners will use an already existing charging infrastructure and vehicles are equipped with telematics and geofencing systems that help to ensure that they are emission-free within pre‑determined low emission zones.

Ford is the No. 1 selling commercial vehicle brand in Europe, and last month Ford commercial vehicle sales in its European 20 markets hit their highest October level since 1993. At the IAA Commercial Vehicles in Hannover, in Germany, in September, Ford showcased a production version of the Transit Custom PHEV that is due to go on sale in the second half of 2019. Ford plans the introduction of another 40 electrified models, including 16 all‑electric vehicles through 2022.