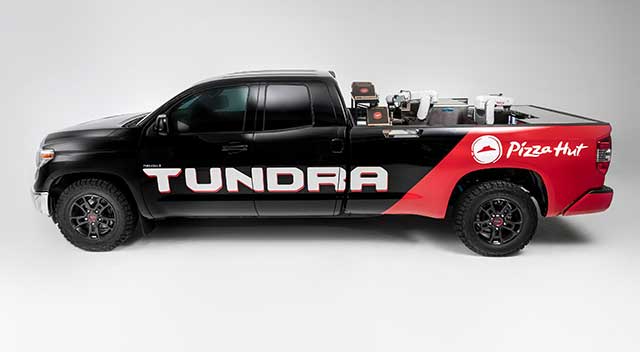 Pizza Hut has teamed with the automotive manufacturing giant Toyota to develop Tundra Pie Pro, a hydrogen fuel cell truck that not only delivers pizza but also prepares them on route to the delivery destination.

The one-of-a-kind, zero-emission Tundra PIE Pro was made especially for the SEMA tech show in Las Vegas.

“As the flagship Toyota truck, the Tundra is a workhorse in the truest sense,” said Ed Laukes, Group Vice President – Toyota Division Marketing. “Its great strengths are its extreme capability and eminent versatility, and what better way to illustrate that than by turning it into something completely unique—a hydrogen fuel cell electric-powered, pizza-making robotic vehicle!”

The starting point was a Tundra SR5 that was torn down to a bare rolling chassis and then reassembled from the ground up. The conventional gasoline-powered drivetrain was removed and replaced with a hydrogen fuel-cell electric power unit adapted from the Toyota Mirai. 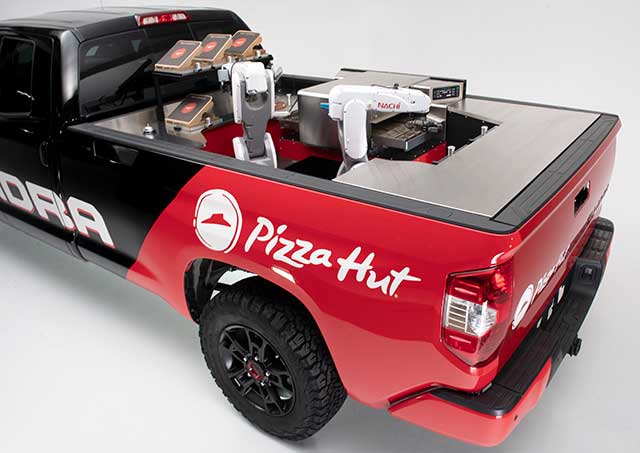 This use of hydrogen is one more example of Toyota’s ongoing, cutting-edge hydrogen fuel-cell technical development. Sales of its hydrogen-powered Mirai surpassed 4,000 units this past September, and the company is continuing development on a hydrogen fuel cell Class 8 commercial truck fleet.

The Tundra’s bed has been converted into a virtual pizza factory on wheels—what MCTI calls The Kitchen. Totally self-contained, The Kitchen comprises a refrigerator, a pair of computer-guided articulating robotic arms, and a portable, high-efficiency conveyor oven. Like the truck itself, all Kitchen components can be powered by hydrogen fuel cell electric powertrain.

From start to finish, the pizza-making process takes between six and seven minutes. When the process begins, the first robotic arm opens the refrigerator and removes the selected pizza, places it on the oven conveyor, and returns to close the refrigerator door. 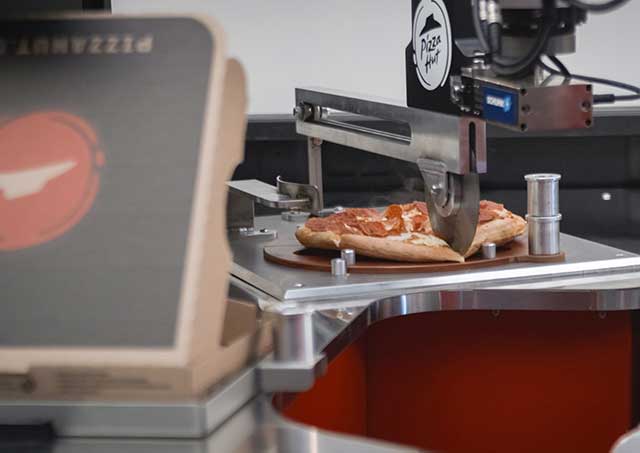 The pizza is then conveyed through a high-speed ventless oven. On the far side, a second robotic arm removes the finished pie, places it on the cutting board, divides it into six identical slices, boxes it up, and delivers it to the customer awaiting on the side of the Tundra.

“We’ve had a hand in putting together all sorts of custom Toyota vehicles over the years, from high-performance racecars to one-of-a-kind show vehicles,” said MTCI’s Marty Schwerter, “but the concept and technology used in this Tundra presented a unique challenge.”

Nov 2, 2018Blagojce Krivevski
Electric Audi RSQ e-tron is first concept car designed for an animated filmGM is Building an eBike and Wants You to Name It