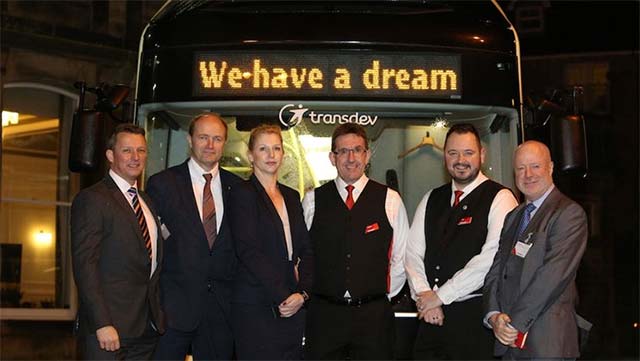 Volvo Buses has received an order for eight electric buses, Volvo 7900 Electric, from Transdev Blazefield, the owner of the Harrogate Bus Company in the UK.

When the vehicles enter service in 2018, the project will be the first of its kind in the UK introducing full electric vehicles using ‘opportunity charging’ via the common interface OppCharge, whereby the charging stations can also be used by electrified buses from other vehicle manufacturers. OppCharge is now starting to be used as a common interface in more than 12 countries.

Opportunity charging takes place via a specialist overhead mast, which connects to the bus via a pantograph.  Charging is fully automated and takes between three and six minutes to complete. Volvo’s electric bus has 80 percent lower energy consumption than the corresponding diesel bus.

The project has been partly funded by the Government’s Low Emission Bus Scheme (£2.25 million).

The largest single market for Volvo’s hybrid buses thus far is the UK, which accounts for almost half (1,425) of the vehicles in operation.

OppCharge features a common interface between charging station and vehicles, based on the car industry CCS standard; conductive charging using current collectors, with communication between the bus and charging station via Wi-Fi. Charging power is 150 or 450 kW. Attaching the pantograph to the pylon makes it possible to use a cost-effective solution that adds little weight to the bus roof.