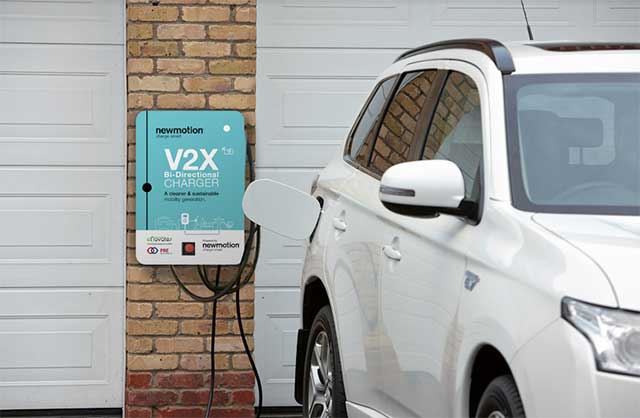 NewMotion, eNovates, and PRE Power Developers have joined forces to create the next generation of Vehicle-to-Grid technology (V2G), known as V2X (Vehicle-to-Everything), which will make V2G more accessible to the general public.

With V2G technology electric vehicles are able to be used to temporarily store energy, but also to deliver this back at a later moment. The three parties developed a new type of charger: the V2X.

Through the smart combination of cloud-based control and integrated design, a connected device has been developed which is physically characterised by a combination of the small dimensions, minimal weight and easy installation, and in functionality characterised by a very fast response time as part of a connected service. This makes the device very suitable for V2G technology to be applied directly at home or at the office.

Get more out of your car with V2G

– With V2G technology, an electric vehicle can provide an even larger contribution to an emission-free world by using a far-reaching integration with renewable energy.

– V2X means Vehicle-to-Everything, where power can not only be returned to the energy grid, but to a home or office as well.

– The V2X-charger can be characterised by its small dimensions, its superior efficiency, rapid response times, and therefore V2X is the first Vehicle-to-Grid charger which is easy to install and therefore very suitable for home-charging.

– The V2X service is characterized by a high efficiency and fast response capability.

– V2X is a building block in a stable grid, marking a further step in the electrification of our energy consumption.

The storage of energy is one of the foundations of international climate and energy agreements. A significant amount of renewable energy is already produced but is hardly being stored.

Sander Ouwerkerk, Business Development Director of NewMotion: “We see that Nissan and Mitsubishi are real pioneers of V2X technology at present, and we wanted to make the bi-directional possibilities, that their cars offer, usable for everyone. NewMotion is therefore proud to make this V2X service available for commercial purposes. It is a perfect addition to the 360-degree service that we already offer in the field of smart charging. With the V2X device, this reaches full service, from installation and maintenance to delivering energy. With our services, electric cars can thus play an even greater role in the use of renewable energy by temporarily storing (sustainable) electricity in the battery of cars. By cleverly dealing with the storage of clean, renewable energy from wind and solar, we can accelerate the switch to an emission-free world. This is possible without major investments in the grid because electric vehicles can keep peaks in supply and demand within the current limits through these V2X services.”

Whereas current V2G chargers are characterized by their industrial size, the V2X charger that the three parties developed is light, small, and efficient, while also delivering a fast response capacity between charging and discharging.

“With this V2X product, you can directly use the DC battery of the car. This is much more flexible and often faster than the usual charging on AC (alternating current) “, says Bart Vereecke of the Antwerp eNovates, which develops chargers. With the bi-directional V2X device, the three parties are taking the first steps in the world of so-called DC charging (direct current). “This product fits perfectly with the DNA of all three companies: innovative, robust and high tech. Together we are the first worldwide to offer an affordable bi-directional service whose device is light enough to hang on a wall. In addition, with our Vehicle-to-Everything technology, you can, for example, power your house in the evenings, with power generated from solar panels in the office during the day. ”

It is not surprising that NewMotion and eNovates found the perfect partner for the DC part of this new product in PRE Power Developers (PRE).”PRE Power Developers has been active for nine years in the development and production of DC power modules for direct current charging of electric cars. We are actively looking for growth markets and align our R&D accordingly. Electric driving is such a market, and certainly that for bi-directional charging,” says Erik van Beusekom, CCO at PRE.  “We have therefore further developed these DC modules so that we can control the flow in two directions, with great efficiency and reactivity.”