Tesla aims to build 500,000 EVs a year at its Chinese Gigafactory 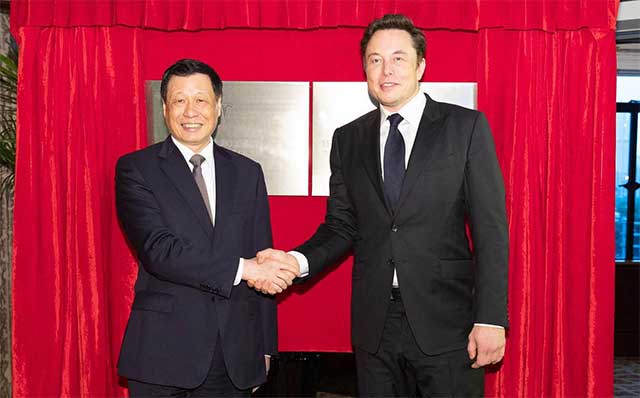 Tesla has signed a Cooperative Agreement with the Shanghai Municipal Government to start building Gigafactory 3, a new electric vehicle manufacturing facility in Shanghai.

Tesla expects construction to begin in the near future after the company get all the necessary approvals and permits. From there, it will take roughly two years until Tesla start producing vehicles and then another two to three years before the factory is fully ramped up to produce around 500,000 vehicles per year for Chinese customers.

According to the agreement, both parties will focus their cooperation on jointly promoting technology innovation and industry development, where the city of Shanghai will strongly support Tesla Shanghai.

Currently, Tesla has Gigafactories in Nevada and northern New York as well as a manufacturing plant in California.

Here’s the press release from the Shanghai Municipal Government:

Tesla Gigafactory, which aims to build 500,000 electric vehicles per year, has officially settled in Shanghai Lingang Area Development Administration. It is the largest foreign-invested manufacturing project in Shanghai’s history. Today, on July 10th, the Shanghai Municipal People’s Government and Tesla signed a Cooperative Agreement. Mayor Ying Yong and Tesla Chairman and CEO Elon Musk were in attendance to unveil a plaque for the Tesla (Shanghai) Ltd. Electric Vehicle Development and Innovation Center. The agreement was signed by Zhou Bo, Executive Vice Mayor of Shanghai, and Robin Ren, Tesla Vice President for Worldwide Sales.

According to the agreement, both parties will focus their cooperation on jointly promoting technology innovation and industry development, where the city of Shanghai will strongly support Tesla Shanghai. Through this, it is expected that Tesla Shanghai will achieve an optimized R&D, manufacturing, and sales operations that will contribute to its global business. This win-win cooperation further enhances Shanghai’s position as a world class automobile manufacturing center.

Tesla also signed an electric vehicle Investment Agreement with the Lingang Management Committee, Lingang Area Development Administration and the Lingang Group. Tesla plans to construct and operate a wholly-owned Gigafactory in Lingang, this factory will carry out R&D, manufacturing and sales operations. On the same day, the Shanghai Municipal Government and Tesla also unveiled a plaque for the Tesla (Shanghai) Ltd. Electric Vehicle Development and Innovation Center, an important part of Tesla’s global R&D system. The Development and Innovation Center mainly focus on electric vehicle R&D and innovation, and will actively promote the transformation of innovative technology achievements for electric vehicles.

Prior to the signing ceremony, Shanghai Mayor Ying Yong said, “As the biggest economic center at the forefront of reform, Shanghai is accelerating the implementation of the central government’s open policy, working hard to build a new industrial system with modern service industries at its core, led by strategic emerging industries, and supported by advanced manufacturing industries. We are glad to achieve strategic cooperation with Tesla, and we welcome Tesla’s R&D, manufacturing and operations of pure electric cars in Shanghai. The Shanghai Municipal Government will give full support to the construction of Tesla’s factory and strive to create a better environment and provide better services for the development of various enterprises in Shanghai, including Tesla.”

Musk said, “Shanghai will be the location for the first Gigafactory outside the United States. It will be a state-of-the-art vehicle factory and a role model for sustainability. We hope it will be completed very soon. We’ve been impressed by the beauty and energy of Shanghai and we want our factory to add to that.”