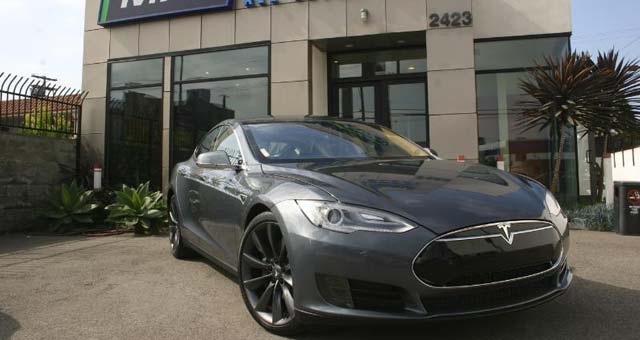 Consumer Reports praised the ability to update the Tesla’s software over the Internet, and that the company surmounted early technical problems, including a handful of fires that started from objects on the road surface kicking into its underside battery pack.

“For all of the impressive new vehicles released in 2014, none was able to eclipse the innovation, magnificence, and sheer technological arrogance of the Tesla. That’s why it’s our best overall pick for the second consecutive year. Through the course of their life cycles, cars become obsolete quickly as newer models appear with updated gizmos. But with Tesla’s over-the-air software updates, a Model S that came off the line in 2013 has many of the same new features as one built today. Despite the Tesla’s teething problems at launch, our subscriber reports showed average reliability. The Model S is a technological tour de force, a high-performance electric vehicle with usable real-world range, wrapped in a luxury package.”

U.S. cars, including the battery-powered Tesla Model S, account for three of the top 10 picks by automobile testers at Consumer Reports for the first time since 1998.

“For years, domestic automakers built lower-priced and lower-quality alternatives to imports, but those days are behind us,” said Jake Fisher, Consumer Reports’ director of automotive testing. “Today many domestic models can go toe-to-toe with the best imports.”

Buick’s Regal beat out a much pricier BMW model as the best sports sedan and the Chevrolet Impala was named the top large car.

“Consumer Reports” says a Top Pick must be at or near the top of the rankings in performance, reliability and safety.