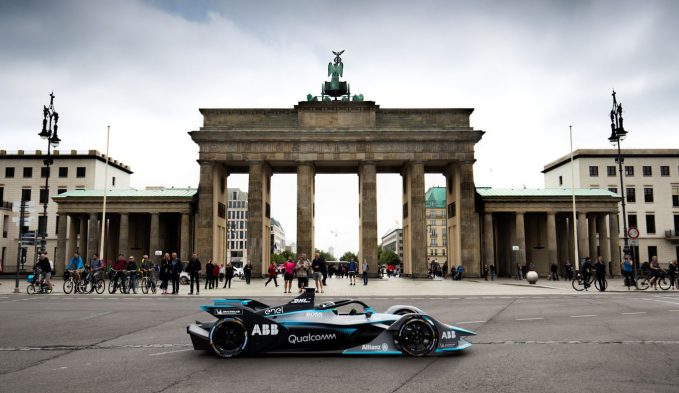 At this year’s Berlin E-Prix, former Formula One champion Nico Rosberg had the opportunity to test out the new Gen 2 race car that will hit the track officially next season.

Starting out in central Berlin, in front of the Brandenburg Gate, the German driver piloted the new Gen2 car past pedestrians and commuters, on his way through Checkpoint Charlie and on to the track. “It’s like seeing a spaceship go through town [for the people of Berlin]. Everyone was out of control, getting their phones out and I even did a selfie with one fan.”

“It was a great drive through the city, I nailed a couple of those doughnuts!” said Rosberg, jumping out the car as he pulled up in front of Berlin’s iconic Templehoff airport terminal. “I really felt great in the car, so I’m really excited to get out on track.”

After the car made its public debut at the Geneva Motor Show in March, this is the first time our Gen2 racer has hit the streets ahead of the Season 5 opener in Riyadh.

“Formula E is the future,” says Rosberg, smiling. “It’s sending out a very strong message to the world and it’s cool. It’s great because it’s racing, it’s a great championship, with some good battles out there – really entertaining, so it’s a great package.”

Since retiring from Formula One, the German motorsport champ has become an investor in the all-electric series. “I joined as an investor a while ago,” he admits. “I’ve been following very closely and believed in Formula E for a very long time. It’s been going really well and, obviously, there’s progress the whole time and now, with manufacturers coming in it’s going to be very interesting to follow in the next few months.”

May 25, 2018Blagojce Krivevski
Switching To Electric Could Save UK Drivers More Than £45 Million This Bank Holiday WeekendNissan unveil convertible version of the new LEAF