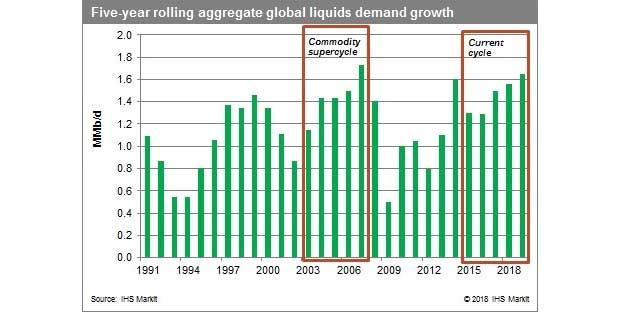 Short-term oil demand is still growing strong and will continue to do so through the end of 2020; a trend taking place despite the market’s increasing focus on electric vehicles and the forecasted future plateau in oil demand, according to new analysis from IHS Markit, a global business information provider.

Refined product demand growth has averaged 1.2 million barrels per day over the last five years, IHS Markit says in the new report from its oil markets and research team. Current global total liquids oil demand growth is at similar levels to what was recorded during the 2003 to 2007 commodity super-cycle, referred to as the ‘golden age’ of refining. At present, current global total liquids oil demand is approximately 100 million barrels per day, the report says.

With economic growth robust and prices still under pressure, indications are that the current strong global refined product demand growth will continue through to end-2020, averaging 1.1 million barrels per day, per year, during the period. IHS Markit expects global GDP to grow by 3.4 percent in both 2018 and 2019, respectively, due to convergence of robust economic activity in many markets around the world.

“Although electric vehicles are making headlines, they are not yet a market force to replace the internal combustion engines that power today’s automotive fleets, so oil demand is currently growing strong,” said Spencer Welch, director, head of global short-term refining research at IHS Markit, and the report’s co-author. “Although EVs undoubtedly have the potential to disrupt the energy and automotive sectors in the longer term, they currently make up around 1.5 percent to 2 percent of total global vehicle sales, and account for less than 0.5 percent of the global vehicle fleet; so their influence on the oil market, in the short term, is limited.”

The IHS Markit report compared the current oil demand growth surge to demand levels during 2003 to 2007, and identified underlying significant differences between the two cycles.

“There are key differences between the oil market today and the oil market in 2003 to 2007, which is important when we seek to assess how sustainable this demand growth cycle is as compared to the past,” Welch said. “Demand growth now is currently more widely distributed, with the OECD (Organization for Economic Cooperation and Development, which includes 35 countries) region and NGLs (natural gas liquids) contributing much more to global oil demand than during 2003 to 2007. In addition, the global oil demand growth is supported by most refined products rather than being concentrated on diesel as it was in the previous period, which is putting less strain on refiners.”

“Refiners are also better prepared to meet current global demand growth than they were in the previous commodity super-cycle, and as a result, have been enjoying a ‘mini-golden age,’ which we expect to continue a while longer,” Welch said.

This diversity of demand, both geographically and in terms of product mix, is an important factor, IHS Markit said, in determining the sustainability of the current cycle, which is key to keeping the oil market in balance, and supporting prices.

According to Welch, the questions that the IHS Markit researchers seek to answer next are: how long will oil demand growth last, and will ongoing economic growth and moderately low, stable oil prices continue to support demand and refining margins into the medium term. “There is a possibility that the OECD-demand growth effects could be short-lived as oil prices gradually start returning to higher levels, fuel economy improves and EV penetration grows,” Welch said.

Another key consideration for total liquids demand, Welch said, will be to determine how long NGLs will provide unusually firm support to oil demand growth. “Increasing upstream activity in North America will support continued growth of NGLs as a pillar of demand,” according to the IHS Markit report.

“Looking forward, we expect a continued reduction in energy intensity to gradually offset the factors currently supporting demand growth,” said Eleanor Budds, principal analyst, oil markets and downstream, at IHS Markit, and a co-author of the IHS Markit report. “Several growth drivers, notably in EVs and fossil fuel regulation, have developed rapidly during the past year and will continue to do so during 2018 and 2019.”

“We expect oil demand growth to remain strong for the next couple of years but looking further ahead, we expect refined product demand growth to start easing back toward 1 million barrels per day per year, principally because of continually improving vehicle efficiency, progressively supported by increasing EV and hybrid vehicle sales,” Budds said. “Vehicle efficiency improvements will be more influential on oil demand than fuel substitution during the next 10 years.”

The period of strong oil demand growth from the commodity super-cycle of 2003 to 2007 was ended by the 2008 global recession, the worst global recession since the Great Depression of the 1930s, but Welch is not envisioning a similar end to this particular cycle for oil demand. ”The current strong cycle of oil demand growth is more likely to gradually ease than to crash, providing ongoing short-term support for global refining margins.”