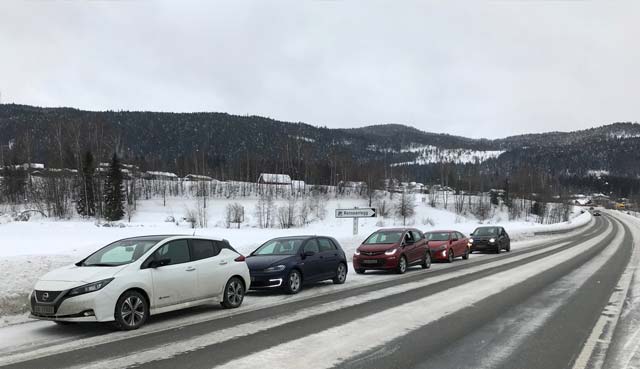 The Norwegian EV Association took five popular battery-electric cars for a road trip in the middle of winter to see how they would perform in cold conditions, snowy and icy country roads.

The electric cars included in the test were: the new Nissan Leaf, the BMW i3, the Opel Ampera-E, the Hyundai Ionic Electric and the Volkswagen E-Golf.

All five were charged to 100 percent state of charge (SOC) upon departure. Interior temperature was set to 20 degrees Celsius in all five BEVs during the whole test circuit. A total of 530 kilometers were logged carefully during the 700 driven.

Eco modes, that are meant for saving energy (typically mean a 10 percent reduction), were deactivated. At the same time various systems for regenerating electricity while breaking were used in an active manner and where appropriate.

– Nissan LEAF and the Volkswagen e-Golf stood out from the crowd regarding safe and steady handling underway, while BMW i3 (the only car with rear wheel drive) and Opel Ampera-e were somehow a bit more nervous
– Opel Ampera-e (named Chevrolet Bolt in the US) is by far the best alternative in the electric C-segment if you need to drive long distances between charging
– Both the i3 (average 40 kW) and the e-Golf (38) performed steadily, but the Ioniq was the best performer with an average fast charging speed of 45 kW
– The Hyundai Ioniq Electric has the lowest energy consumption of all the cars in the group.

Regarding electricity consumption the Hyundai Ioniq is by far the champion. When it comes to handling the Volkswagen e-Golf excels in all areas, while the LEAF in our opinion delivers the best compromise. The handling discipline was not examined thoroughly, due to slippery roads on longer stretches and our ambition to keep consumption at decent levels.

“The general refrain within the test team was that “none of the cars is best for all.” It is all about use pattern. Or taste and comfort. That is the main reason why the Opel Ampera-e and Hyundai Ioniq were the most discussed during the test. They remain references for different OEM approaches regarding usable battery capacity and fast-charging speed, while the remaining trio delivers consistently well in these areas without excelling in particular.”

To see more results and a video of the most comprehensive electric car winter test, we highly recommend to read the original EV Association story.