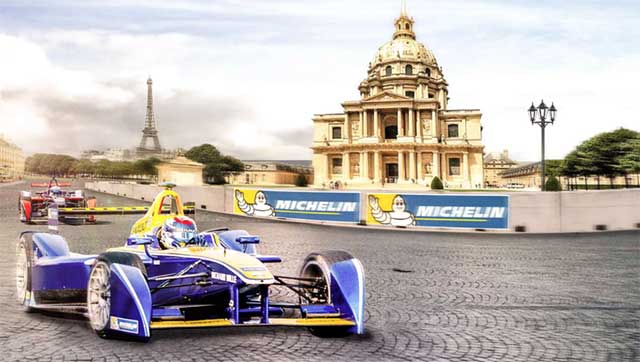 After kicking off the ABB FIA Formula E Championship’s European campaign with the first all-electric, single-seater race on the streets of Rome, it’s back to Les Invalides, in Paris – the city of light – for the third time in the series history.

But it’s not just the stunning architecture, sights or sounds that bring us back to the heart of Paris year on year. No, it’s deeper than that. As the birthplace of motorsport, hosting the first ever motor race between Paris and Rouen in 1894, Paris was also the city in which Formula E was first founded. Scribbled on a napkin at a dinner between Alejandro Agag and Jean Todt – President of the FIA – the concept of an all-electric, single seater championship came alive.

Since then, it’s been four years of nothing but top-level wheel-to-wheel racing between 20 drivers, 10 teams all fighting for the championship title over five continents. But we’re only just getting started. With a record number of fans expected to arrive at Les Invalides on race day – Saturday April 28 – for the 2018 Qatar Airways Paris e-Prix, the pressure is only increasing as we near the end the double-header season finale in New York on July 14 and 15.

In season four so far, Techeetah’s Jean-Eric Vergne has worked his way to the top of the standings after consistently scoring points in every race, including two wins in South America – Santiago and Punta del Este. Sitting behind him is DS Virgin Racing’s Sam Bird, who’s patiently waited for a championship win since he first started out in the series from the very beginning in 2013. With a win in Hong Kong at the start of the season and, more recently, in Rome Bird’s is a top contender for the championship title, especially as he’s only 18 points adrift of the series leader.

But what about Mahindra Racing’s Felix Rosenqvist? Currently sitting third in the championship standings, the Swede’s season got off to a great start after he clinched victory in Hong Kong and Marrakesh before reliability problems hampered his performance in Mexico City and Rome, where he was forced to retire from the race. Still as determined as ever, Rosenqvist will be eager to protect his third place in Paris. With just 19 points between him and Sebastien Buemi in fourth, he’s going to have to work for it.

Speaking of Buemi, it was here in Paris last year where the Swiss driver cruised to victory with hometown team Renault e.dams. Leaving Frenchman Jean-Eric Vergne in the wall after a mistake in front of a home crowd left him walking back to the pit lane.

With 69 points separating the top five drivers and five rounds of the championship left, it’s all still to play for as we countdown the hours until the lights go green here in Paris for the 2018 Qatar Airways Paris E-Prix.