The evolution of Formula E: Gen1, Gen2 and the future 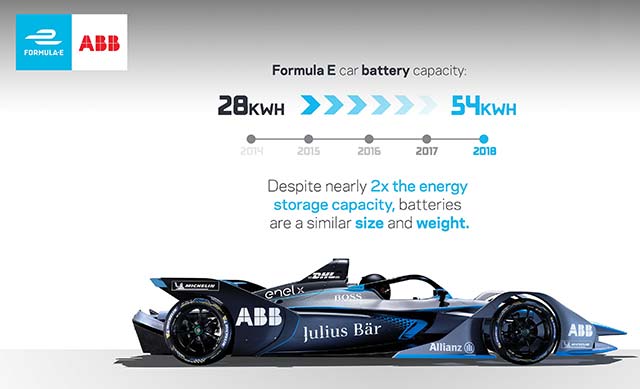 While the ABB FIA Formula E Championship is just six seasons old, the on-track technology is ever-evolving and has undergone revolutionary changes in that six-year spell.

In Season 1, back in 2014, Formula E ushered in a revolution with the all-electric open-wheel Gen1 car – a first of its kind in motorsport. In the six short years since, Formula E waved goodbye to that initial era of mid-race car swaps and welcomed the next step-change in technology for Formula E with Gen2 in Season 5. More power and almost twice the usable energy capacity, effectively doubling range despite its battery being about the same size and weight as its predecessor.

Before the leap to Gen2, Gen1 itself saw a number of changes. In Season 2, the regulations were opened up to allow manufacturers to design their own motors, inverters, gearboxes and rear suspension, with power also bumped to 170kW (230bhp).

For Season 3, a mid-life refresh for Gen1 introduced a redesigned and stronger front wing to better cope with the rigours of street racing, whilst regen saw a 50 percent improvement in efficiency thanks to a major battery technology upgrade – all while reducing the car’s overall minimum weight by eight kilos.

Gen1’s swansong came in Season 4 with Gen2 on the horizon, but we still saw another 10kW bump to overall power. Then came Gen2 with its raft of changes and the ability to run a full race on a charge, and far faster than its predecessor. Safety improvements were built into the new car in the form of the FIA-mandated halo device and ATTACK MODE added an extra layer for drivers and race engineers to get their heads around – with a risk/reward power boost to incorporate into race strategies.

ATTACK MODE was made more potent in Season 6, being raised from 225kW to 235kW, with regen now so efficient that the FIA mandated a 1kWh reduction in usable energy for every lap spent under the BMW i Safety Car or full course yellow – meaning energy management would always remain a key component to any race-winning drive.

Every step of the way

Audi Sport ABT Schaeffler’s Lucas di Grassi has been with Formula E since day zero, pre-Season 1, in-fact, and was there throughout the championship’s formative moments before we got underway in 2014/15.

At that time, creating an all-electric open-wheel championship of the scope of Formula E was a tough ask. Nothing of its kind had been attempted before and the technology, though available, was very much in its infancy.

The 2016/17 champion said it was a case of using what was sure to work, before opening up the platform for manufacturers to tinker and develop – driving the race-track to road philosophy that is at Formula E’s heart, as the series pushes clean, sustainable mobility forward.

“The Gen1 car had to use technology that would be capable, as nobody had produced an electric racing car like it before,” said the Brazilian. “So, it was relatively simple – pretty basic in fact – but with scope for teams to make improvements and develop things.

“As soon as the technical restraints were opened up (from Season 2), you saw performance and efficiency improvements right away. A five-year development programme in the real world, aiming to create a 10 per cent efficiency saving from the motors, was completed in just a year of competition in Formula E.

“By Season 4, we had the big step coming with Gen2. By then, people had learned best practices – what was right and what didn’t work quite so well – so a leap forward was possible. Moving from two cars to a single car was huge and I expect the same, or an even bigger step, for Gen3 in a couple of years’ time.

Gen3 and the future

The Gen3 Formula E car will see another leap forward in terms of performance on-track, and not only that but it’s going to be more sustainably-produced than ever before.

Manufacturers must propose a full Life Cycle Assessment for their proposed car, with challenges made on the use of sustainable materials, the lifespan of consumables, recycling and second life projects for used components and more.

On the road, the number of electric car models has increased by six times since Formula E’s first season, with more than 175 now available in Europe.

As with the Gen2 car, and the continuing evolution of Formula E’s on-track tech, range and battery capacity has also moved on leaps and bounds in consumer EVs.

The 2020 Nissan Leaf, for example, has almost triple the battery capacity and range compared with the original 2015 model. In the same five-year spell, the number of EV chargers in Europe has increased more than three times over, with some 170,000 now built into infrastructure across the continent.

As technology develops, electric cars will be able to go faster and further. The pace of development is incredible,” adds di Grassi. “The point at which electric cars are cheaper, safer and easier to operate than combustion-engined cars is not far away at all and Formula E is accelerating that process. Combustion won’t be able to keep up.

“The purpose is to create a better, cleaner, safer future for mankind with innovation and technology. In general, people will naturally go for convenience and necessity, as well as the cheapest, best solution for them. So, we need to create technology that fills this gap and serves this purpose, then, the best option will be the most sustainable one – that’s the win-win situation to chase.”