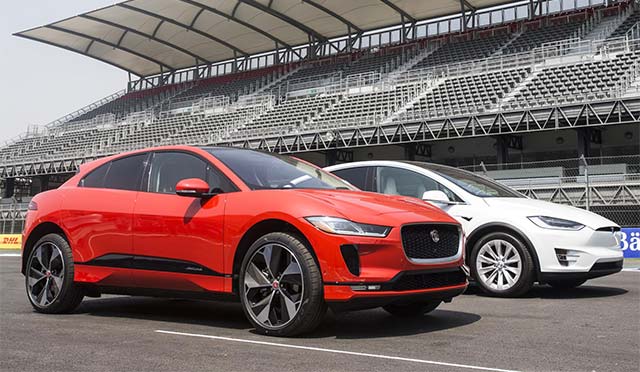 Ahead of this weekend’s FIA Formula E race at the Autódromo Hermanos Rodríguez E-Prix circuit in Mexico City, the Jaguar I-PACE was pitted against both the Tesla Model X 75D and 100D in an electrifying 0mph-60mph-0mph head-to-head challenge.

Panasonic Jaguar Racing’s Mitch Evans got behind the wheel to showcase the acceleration and braking power of the Jaguar I-PACE against the Tesla Model X models, driven by former IndyCar Series champion Tony Kanaan.

The I-PACE has a state-of-the-art 90kWh Lithium-ion battery and offers sports car performance of 0-60mph in 4.5 seconds alongside the practicality of a 240 mile range and 0-80 per cent charging time of 40 minutes (100kW DC). Allied with its concept car looks and next-generation artificial intelligence, it is set to be the perfect everyday EV consumers have been waiting for.

Jaguar’s first all-electric production vehicle, the I-PACE, has been unveiled to the world in a live broadcast on Thursday. ‘Fully Charged’ aired a documentary at the end of the broadcast, giving a behind-the-scenes insight into the creators and makers of I-PACE. Watch the video to find out how I-PACE was made and how it changes everything for British luxury carmaker.

Designed and engineered in the UK, the I-PACE will be built in Plant Graz, Austria, as part of Jaguar Land Rover’s manufacturing partnership with Magna Steyr. It joins Jaguar’s growing family of SUVs, alongside the all-new E-PACE and multiple award-winning F-PACE.

Jaguar I-PACE is on sale now from £63,495 in the UK (excluding government incentives). In addition to S, SE and HSE derivatives, there will also be a limited number of First Edition I-PACE models available.