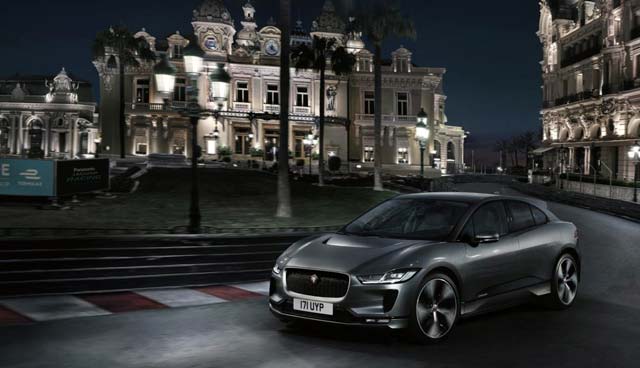 Jaguar has taken to the Monaco Grand Prix circuit to showcase the performance and handling of its first battery electric vehicle (BEV), the Jaguar I-PACE.

Monaco’s iconic harbor layout was the perfect venue for the performance SUV’s late-night test, with its combination of technical straights, tight twists and turns.

Unveiled on March 1 and available to order now, the I-PACE has a 90kWh lithium-ion battery with an estimated range of 240 miles (386 km), and is capable of charging from zero to 80 percent in as little as 40 minutes using a100kW DC fast charger.

Coinciding with season five of the Formula E Championship over the 2018/2019 race calendar, Jaguar Land Rover Special Vehicle Operations division will supply up to 20 Jaguar I-PACE eTROPHY race cars for the unique series.

Perhaps best known for its motorsport history, in the past few years the Principality of Monaco has become a leader in sustainability as well; making significant investments in renewable energy, proliferation of electric bike and car sharing schemes for residents, as well as its stringent monitoring of air quality.

The I-PACE is priced from from $69,500 before federal and local government incentives.