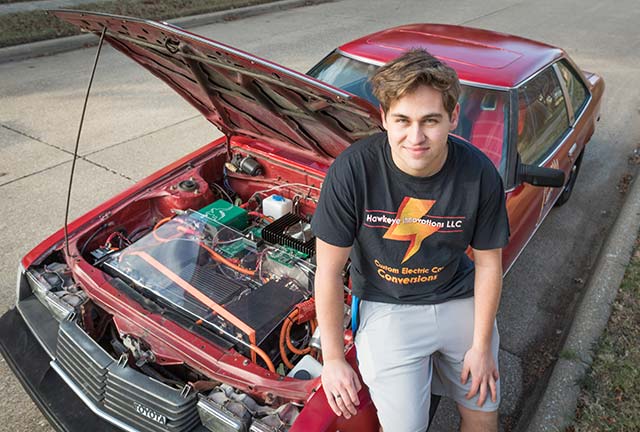 Adam Lansing’s prized possession started out as a few thousand pounds of trash with a tree branch growing through the rear bumper.

When Lansing was just 12 years old, a friend’s dad overheard him talking about wanting to convert a gas-powered car into a fully electric vehicle. So the dad gave Lansing an engineless 1980 Celica he had lying around outside his garage.

Lansing took it because, if you’re gonna build your own electric car, you might as well do it with a little style, right? 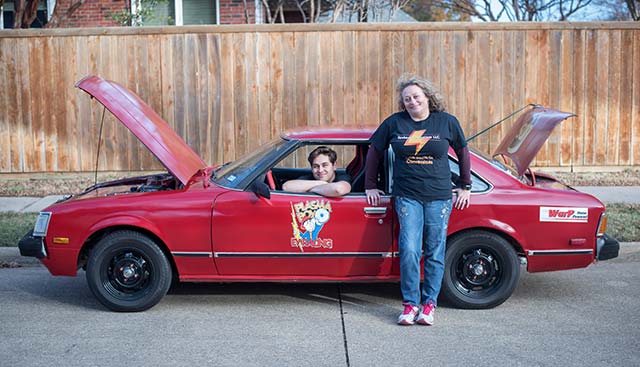 Fast forward to today. A total of 52 rebuilds, six years of frustration and some huge triumphs have turned that Celica into something unique: A 130-mile range electric vehicle, powered by 94 lithium ion batteries.

The Gas Factor
Lansing got the idea to convert a gas car to electric, after watching his older brother constantly ask their parents for gas money.

“I thought that was a real drag,” Lansing says.

But the true inspiration came from watching YouTube clips of a man named John Wayland, who converted a 1972 Datsun 1200 into a high-powered electric dragster he called “White Zombie.”
“I saw the way that it shot off the line on the drag strip. So I did more research,” Lansing says. “John talked about how it was all electric and there was barely anything under the hood. When he started talking about the simplicity of the car and that everyone can do it, I connected that to old electric scooters I used to work on, and a light bulb went off. I thought ‘I can do this.’”

Lansing, now 18 and contemplating his collegiate future after graduating from Plano East High School in Texas, got the major parts for his Celica when he was 14. When he was 16, he got it running for the first time, driving it to school his last day of sophomore year. After school, he went to a bowling alley with friends. When the Celica died on the way home, a euphoric victory turned into two more years of rebuilding.

Lansing didn’t realize it at the time, but his constant fixing and rebuilding mimicked Toyota’s dedication to kaizen – or continuous improvement. He’d find a problem and fix it. Then he’d repeat the process again and again. He had a rule: Every time he rebuilt the car, he didn’t put it back together unless he could improve it somehow.

“I learned a lot in the six months after the motor failure,” he says. “The car didn’t work, but I was still moving forward on it, getting closer to fixing it.” 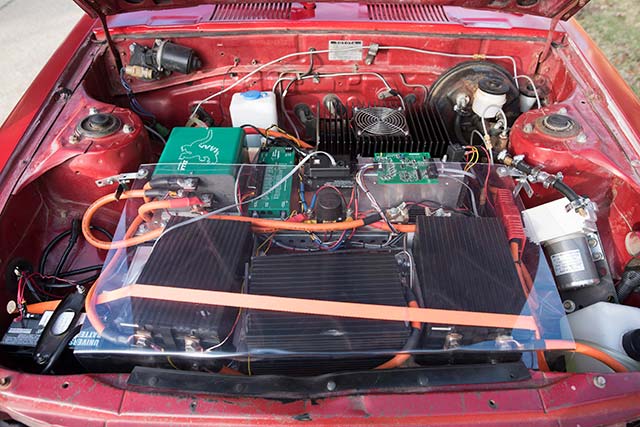 The Frustration
Still, those six months after the motor failure weren’t a happy time for Lansing. He became obsessed, spending up to 20 hours a day tearing down and rebuilding his Celica. But he persisted.

“I was a hair away from throwing in the towel,” he says. “To this day, I’ve rebuilt the car 52 times. Part way around 35 to 40ish was when it got the most frustrating. But the support from my family, friends and girlfriend kept me going. You have to keep in mind the end goal.

“I think my need to innovate took over at that point. I see I’ve gone this far, I’m not gonna quit now. Finally, I told myself, ‘This is supposed to be fun, it’s not a chore. I should love this.’ Right then, I changed my mindset, I started figuring more things out. Those long rebuild days weren’t as dreadful. It made the whole thing better.”

The end result of that effort – two years later – was a range that went from 12 miles to 130, and a car that can be driven wherever Lansing needs to go.

“I can drive to the airport from my house a couple times,” he says proudly. And, given the distance of Dallas-Fort Worth International airport from his home in Plano, that’s a grand accomplishment.

Earlier this year, Lansing’s project took a hit once again when he was rear-ended by an overzealous pickup truck. So he rebuilt. Again.

The Help
Of course, Lansing didn’t do it alone. His parents funded his mission. His brother’s gas crisis gave him inspiration, his sister’s electric scooter gave him early experience. His girlfriend gave him support.

Wayland gave him inspiration and, later, advice as a mentor. Lansing also frequented online forums for ideas on how to fix issues.

Lansing also started his own company, Hawkeye Innovations LLC, and hopes to eventually make a living doing gas-to-electric conversions for others.

It’s a plan that wasn’t in place when he began working on the Celica six years ago. He started his project for fun and ended up finding a calling.

“This was me finding what I wanted to do with my life,” Lansing says. “When I started, I didn’t have an idea. So maybe this made a difference in me. I found something I can be successful in and be passionate about. So this Celica gave me that drive within that I needed.”