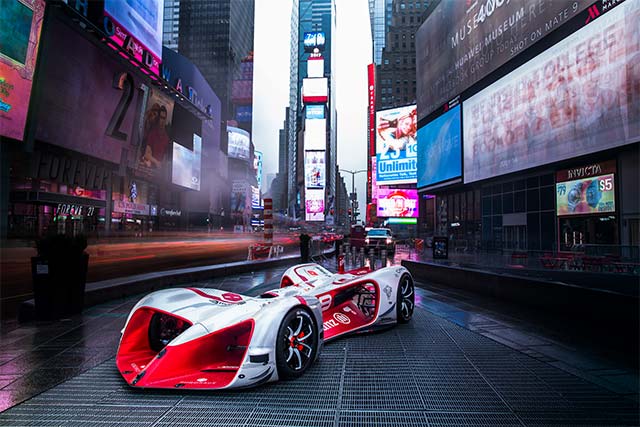 Roborace, the global championship of intelligence and technology, is hosting a special showcase of Robocar, the world’s first driverless electric racing car, in Times Square in New York City today.

The exhibition, located on Broadway between 45th and 46th Streets, kicks off Roborace’s weekend at the inaugural FIA Formula E Qualcomm NYC ePrix Championship in Brooklyn where the company will be performing demonstrations of autonomous vehicle technology using their development prototype car, DevBot.

“We’re thrilled to mark Roborace’s U.S. debut with a showcase of our beautiful Robocar in the iconic Times Square,” said Denis Sverdlov, CEO of Roborace. “Driverless and electric technologies will be extremely important in cities like New York City, and Roborace is bringing them into the public’s consciousness.”

“It is exciting to bring the Robocar to one of the most forward-thinking cities in the world,” said Daniel Simon, CDO of Roborace. “One of the core ideas of autonomous driving is to solve traffic, and to see the Robocar surrounded by the congested streets of Times Square is a great reminder of those goals.”