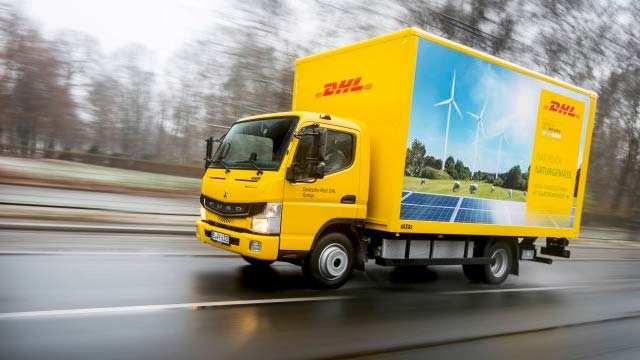 Today, Daimler Trucks is handing over the first units of its all-electric FUSO eCanter to European customers.

The renowned and globally operating logistics companies DHL, DB Schenker, Rhenus and Dachser will now use the all-electric light-duty truck in series production in their fleet. In the future these FUSO eCanter will play an important part in the companies’ sustainable fleet management, especially in urban delivery transport and various other logistics tasks.

With the presentation of the product brand E-FUSO in October this year, FUSO has already strengthened its commitment to alternative drivetrains. Over the next few years, all truck and bus models will offer one additional electric variant.

The customers are all in the logistics business, but the trucks’ areas of operation are divers. All customers are putting the vehicles to work that is usually carried out with conventional drivetrains. The customer’s decision for the FUSO eCanter was influenced by factors such as noise and emission reductions, fleet-sustainability and also by economical reasons. The drivers of the FUSO eCanter will be trained to operate the vehicle. The customers obtain their vehicles via a 24 month long-term rental from CharterWay, Daimler’s own rental and leasing expert in the commercial vehicle business.

Deutsche Post DHL will use its six vehicles in two important business divisions: Two vehicles will perform inner city delivery runs of business and private customers of DHL Freight’s Berlin branch, for heavy individual cargo, such as electrical or large household appliances. DHL Paket will use four vehicles for the delivery of goods to businesses and corporate clients. For this, the electric trucks will be fully integrated in existing business processes and will replace the vehicles with conventional drivetrains which were used so far.

DB Schenker chose the FUSO eCanter consciously. The new vehicles give DB Schenker an opportunity to test a series production electric vehicle for inner city logistics under real-life production conditions. Among other tasks, one of the three trucks will deliver and collect general cargo in the inner city of Berlin.

Rhenus Group, a globally operating provider of logisitcs, will use the three FUSO eCanter within its home delivery unit. From the central warehouse in Hoppegarten, the all-electric trucks will deliver furniture, consumer electronics, home appliances and heavy sport equipment to the inner city of Berlin.

Two more FUSO eCanter will be driving for the transport company Dachser. Their job will be the general goods transportation core business on the last mile, meaning pallets with industrial goods either at micro-hubs or goods that are delivered directly to the customer, as well as collecting goods and delivering them to the Dachser-branches. At these branches, the eCanters will recharge overnight using a high-voltage loading station.

Customers benefit from an extensive pool of experience

After years of thorough development and testing, the FUSO eCanter is now fully integrated in the conventional FUSO Canter’s production line. In July this year, production in Tramagal, Portugal started. All eCanter for the European and the U.S. markets are produced here.

On September 14, 2017 the new FUSO eCanter was launched to the global market in New York City. It is the world’s first all-electric light-duty truck from series production. Over the next years, Daimler subsidiary Mitsubishi Fuso Truck and Bus Corporation (MFTBC) is planning to deliver a total of 500 trucks of this generation to selected customers. The large-scale series production is planned to start in 2019. In the U.S., FUSO eCanter are already committed for delivery for the logistics company UPS and in Japan the convenience-store chain Seven-Eleven and Yamato Transport each will operate 25 eCanter in their fleets.

FUSO looks back on years of gathered experience and know-how with hybrid and electric drivetrains. Since 2005, FUSO is offering the Canter Eco-Hybrid, a truck with hybrid drive train, to customers in Europe and Asia. In 2010, at the International Motor Show Germany for commercial vehicles (IAA), FUSO presented a first prototype of the electric Canter – the start of a pre-series production for testing in 2014. The development of a new series production was fueled by the entire pool of experience and findings from numerous customer-testing with pre-production vehicles in Portugal and Germany that were carried out between 2014 and 2017.

Depending on body and field of application the eCanter has a load-bearing capacity of up to 4.5 tons. The vehicle‘s electric power train contains six high-voltage lithium-ion batteries with each 420 V and 13.8 kWh. Instead of a diesel engine, an electric drivetrain with a strong permanent-magnet-engine delivers 129 kW (180 hp) via a single-gear transmission in the rear axle. 285 newton meter of continuous output allow the 7.49-tons truck to accelerate almost like a passenger car and are available from the first second of driving. The maximum speed of the eCanter – like with any other vehicle of its weight class – is limited to 80 kilometers per hour. The batteries with a total weight of approximately 600 kilograms allow a range of over 100 kilometers and so surpass in many cases the daily distance to cover in light distribution transport.

The all-electric light-duty truck is MFTBC’s answer to the public’s need for a zero-emission, zero-noise truck for continuously increasing inner city distribution. The eCanter is not only an eco-friendly vehicle, it is also cost-efficient and economical for customers. In comparison with a conventional diesel truck, it offers savings up to 1,000 Euro per 10,000 kilometers on operating costs.

At the Tokyo Motor Show at the end of October, MFTBC announced it will electrify its entire range of trucks and buses of its FUSO brand in upcoming years. With the new product brand E-FUSO, MFTBC becomes the first OEM with its own electric brand for trucks and buses. In the following years all FUSO truck and bus models will offer an additional electric variant. The timing for the launch of each model will be defined according to the required technology and feasibility.

In the electrification of its trucks and buses FUSO benefits strongly from the abundant experiences and technical resources of Daimler, which heavily invests in electric mobility. Daimler is consistently using synergies between its passenger cars and commercial vehicle divisions. The Deutsche Accumotive – also a Daimler subsidiary – provides the batteries for E-FUSO trucks. Mercedes-Benz Energy – a specialist for stationary energy storage systems – is developing opportunities for a second lifecycle of the batteries. Daimler also holds stakes in ChargePoint, the world’s largest provider of charging stations and infrastructure, as well as in StoreDot – an Israeli start-up developing a new fast-charging battery technology.