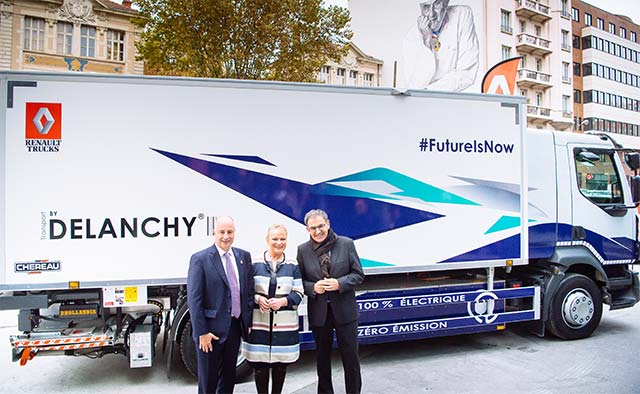 Groupe Delanchy, which specialises in temperature-controlled transport and logistics, and Renault Trucks, a pioneer in the field of electromobility, are continuing their collaboration that began fifty years ago. Throughout this time, Renault Trucks and Groupe Delanchy have always been focused on the future and have made clear their commitment to developing new technologies that are environmentally friendly.

Now, in relation to electromobility, they have jointly developed this experimental electric truck. It is equipped with a Chereau temperature-controlled box and a Carrier refrigeration unit, fully powered by the vehicle’s traction batteries: a first on this type of truck.

Although being an experimental vehicle, this 13-tonne electric truck will be used under real operating conditions in Lyon, the historic birthplace of Renault Trucks. This city has also played an important part in Groupe Delanchy’s history: with the introduction of its first route in 1968, fresh produce could to be transported from Lorient to Lyon in less than 24 hours.

On a daily basis, the 100% electric Renault Trucks D will leave Groupe Delanchy’s distribution hub in Corbas, in the suburbs of Lyon, to deliver seafood and fresh produce from Lorient to Les Halles de Lyon Paul Bocuse.

This zero-emission truck is the ideal solution for maintaining air quality and reducing congestion in the city centre, because it allows noise-free deliveries to be made during anti-social hours, maintaining peace and quiet for residents. Because it produces no polluting emissions, this vehicle also helps maintain the area in which the operatives are working, the unloading dock at the Halles de Lyon, which is a confined space in the basement.

This 100% electric rigid chassis vehicle will supplement the 700 Renault Trucks of the Delanchy, group.