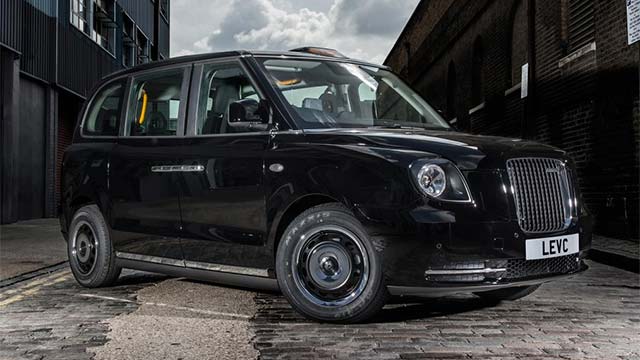 LEVC, which is owned by Geely, the Chinese parent of Volvo, yesterday revealed its new electric range-extended black cabs would be priced upfront at £55,599, including the battery.

Taxi drivers may also be eligible for up to £7,500 towards the vehicle through the Office for Low Emission Vehicle’s (OLEV) Plug-in Taxi Grant.

Ahead of taking deposits for the first time and opening the order book, LEVC confirmed final pricing and indicative running costs for the all-new TX model. The launch finance package – through which more than 90% of drivers are expected to buy the new TX – is confirmed at £177 per week, including the battery over five years. The outgoing TX4 model was priced at £167 per week over four years.

The all new electric TX is based on eCity technology comprising a battery electric power train with range extender providing over 400 miles range between charges including well in excess of 70 miles with zero emissions.

As well as offering complete range assurance and flexibility, the TX with its eCity technology will also significantly reduce costs for taxi drivers. Currently, a taxi driver using the outgoing TX4 Euro 6 model with its 2.7-litre diesel engine, and driving an average of 115 miles per day, will spend around £150 per week on fuel. A taxi driver operating the same cycle in a new TX is estimated to save £100 per week on fuel.