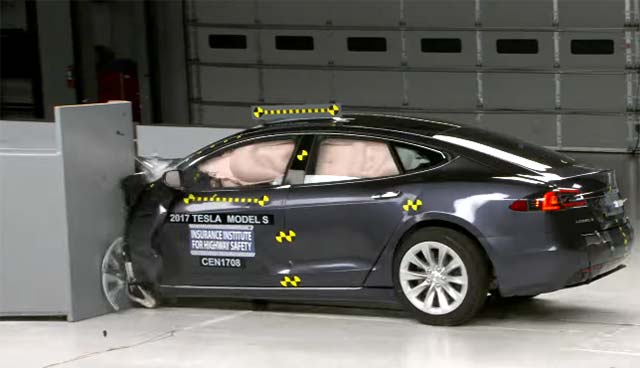 The Tesla Model S did not get the top score in certain tests by the Insurance Institute for Highway Safety (IIHS), the agency announced on Thursday.

The Lincoln Continental, the Mercedes-Benz E-Class and the Toyota Avalon come out at the top of a group of six large cars recently evaluated by the IIHS. The three cars qualify for TOP SAFETY PICK+, the Institute’s highest award.

The Tesla Model S, the Chevrolet Impala and the Ford Taurus fall short of any award because they each earn only an acceptable rating in the small overlap front test.

“This group of large cars includes some with stellar ratings, but our small overlap front test remains a hurdle for some vehicles,” says David Zuby, IIHS executive vice president and chief research officer.

A Tesla spokesperson disputed the IIHS’ findings in an emailed statement:

“While IIHS and dozens of other private industry groups around the world have methods and motivations that suit their own subjective purposes, the most objective and accurate independent testing of vehicle safety is currently done by the U.S. Government which found Model S and Model X to be the two cars with the lowest probability of injury of any cars that it has ever tested, making them the safest cars in history.”

The Tesla Model S initially had earned an acceptable rating in the small overlap test, which represents the type of crash that occurs when the front driver-side corner of a vehicle hits a tree or utility pole or collides with another vehicle. The main problem with the performance of the Model S was that the safety belt let the dummy’s torso move too far forward, allowing the dummy’s head to strike the steering wheel hard through the airbag.

Tesla made changes to the safety belt in vehicles built after January with the intent of reducing the dummy’s forward movement. However, when IIHS tested the modified Model S, the same problem occurred, and the rating didn’t change.

Although the two tested vehicles had identical structure, the second test resulted in greater intrusion into the driver’s space because the left front wheel movement wasn’t consistent. Maximum intrusion increased from less than 2 inches to 11 inches in the lower part and to 5 inches at the instrument panel in the second test.

The greater deformation in the second test also resulted in damage to the left front corner of the battery case. The deformation was limited to an area that didn’t contain battery cells in the tested vehicle, so this damage didn’t affect the rating. Higher-performance variants of the Model S could have battery cells in this area, but, according to Tesla, they also have different structure. They haven’t been tested separately and aren’t covered by this rating.

The Model S is only available with headlights that earn a poor rating and hasn’t been rated yet for front crash prevention. While automatic braking comes standard, the software for the feature was only recently activated.