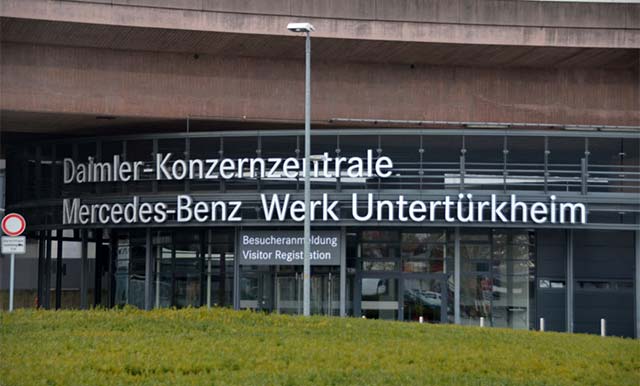 The Mercedes-Benz Unterturkheim plant will be further developed into a high-tech location for electric components, German luxury automaker announced today.

The basis for the transformation of the tradition-rich plant is a set of measures that has been jointly approved by the plant’s management and works council. It paves the way for a successive transition from the production of conventional engines, transmissions and axles to the future powertrain components for electric vehicles.

This includes, for example, a new battery production at the site and the assembly of electric modules for front and rear axles. This makes the Unterturkheim plant a competence center for the integration of the entire electric powertrain into production.

“In the global production network of Mercedes-Benz Cars, we are actively shaping the future and showing that we can do both: sprint and marathon. In the coming years, we plan to produce a rising number of powertrains for conventional and hybrid vehicles. At the same time, we are creating competitive conditions in our plants with regard to electric mobility. With this further development, Unterturkheim will continue to be the lead plant in the global powertrain production network,” states Markus Schäfer, Member of the Divisional Board of Mercedes-Benz Cars, Production and Supply Chain.

In order to ensure competitiveness, the company agreement reached between the plant’s management and works council includes measures to enhance flexibility and efficiency. This refers for example to the optimization of the plant’s operating time as well as to variable shift models and flexible workforce deployment.

“After intensive discussions with the works council, we have reached an agreement that places the Unterturkheim plant on a competitive basis. At the same time, we are moving forward in the direction of electric mobility. This is excellent news for the employees and the region. In the future, products from our plant will be in every electric vehicle from Mercedes-Benz. The transformation of the Unterturkheim plant in the Neckar Valley with its long tradition has thus been initiated,” states Frank Deiß, Site Manager Mercedes-Benz Unterturkheim Plant and Head of Production Powertrain Mercedes-Benz Cars.

The establishment of a flexible battery production will bring a completely new product to the Unterturkheim plant. If the combustion engine so far has been the “heart” of the conventional powertrain, the battery is the heart of an electric vehicle. In the future, for example, the passenger car plant in Sindelfingen will be supplied with batteries for electric vehicles of the EQ product and technology brand from Unterturkheim. This means that Daimler is now planning the fourth battery factory in its global battery production network, after the two plants in Kamenz and one in Beijing. Battery production in Unterturkheim will be located in the Brühl section of the plant.

The plant’s management and works council have also agreed that powertrain modules for electric vehicles from the compact to the upper and luxury class of the EQ product and technology brand will be assembled in Unterturkheim. Increasing numbers of conventional axles will still to be produced. Unterturkheim will continue to benefit from its existing expertise in lightweight construction for axles and structural components used in vehicles with combustion engines as well as in electric vehicles.

In order to pool expertise in the field of battery-electric vehicles, Unterturkheim will set up a “project house eATS” in order to develop additional know-how for the next generation of an electric drive system (eATS). This leads to an even closer interaction between development and production.

The so-called “E-Technikum” at the Mettingen section of the plant that was agreed upon in the first stage of negotiations is to be further developed and significantly expanded. This means that the Unterturkheim plant will obtain a competence center in which electric-drive prototypes will be built. In this way, the plant is ensuring important know-how as a ramp-up factory, in particular for battery production as well as for the integration of future key technologies in production.

“Unterturkheim is taking a large step towards electric mobility. We want to produce the electric-drive system in the Neckar Valley. This decision is the basis for that. We are getting a project house in which experts from our research and development department will develop know-how for the electric drive systems of future EQ models. In addition, battery-system assembly is being set up in the Neckar Valley. The technology factory will be expanded, thus strengthening our competencies for alternative drive systems. These are good signals for the Unterturkheim plant,” states Wolfgang Nieke, Chairman of the Works Council Mercedes-Benz Unterturkheim Plant.

Contribution to competitive conditions at the plant

The current agreement is based on the transformation plan from 2015 and defines further steps of development. This still includes the production of increasing numbers of highly efficient conventional combustion engines and of plug-in hybrid systems. Since then, the Unterturkheim plant has also been responsible for the assembly of fuel-cell systems. With the new agreement, stack production for the fuel-cell is added in Unterturkheim to fuel cell system assembly. As agreed upon in the 2015 transformation plan, several billion euros will further be invested into the future development of the Unterturkheim site in the next years.

In total, the agreement creates over 250 new jobs in the area of e-mobility and has long-term effects for safeguarding the employees at the site.

By 2025, fully electric vehicles are to account for between 15 and 25 percent of the total unit sales of Mercedes-Benz. At the moment, the Unterturkheim plant is operating at full capacity. The company anticipates ongoing growth in the production of conventional engines, transmissions, axles and components in the foreseeable future.

Jul 13, 2017Blagojce Krivevski
Survey: 69% Of Britons Would Consider Switching To An Electric VehicleFirst half of 2017 sees record 22,480 plug-in cars registered in the UK