How the Formula E Season 3 title can be won? 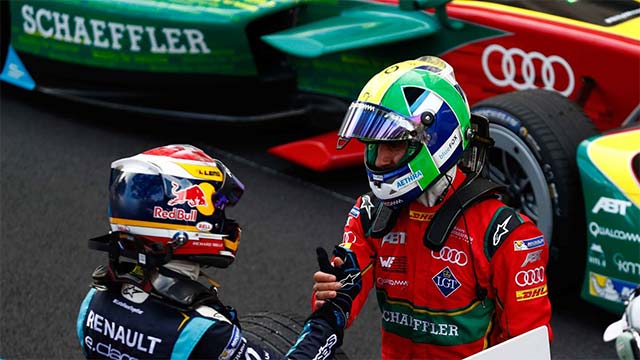 After over nine months, almost 1000 kilometres of racing across 10 hard-fought races, the 2016/2017 Formula E season draws to a conclusion this weekend in Montreal.

It’s the third double header of the season, which means there are a maximum of 58 points available. This also means that Felix Rosenqvist and Sam Bird are still in with a mathematical chance of winning the championship, although in reality for the second season in a row the title will boil down to a straight fight between Sebastien Buemi and Lucas di Grassi.

How Bird can win it

With a deficit to Buemi of 57 points, Bird basically needs a miracle. He has to win both races from pole, setting the Visa Fastest Lap in the process, while hoping that Buemi doesn’t score a single point. Given that this hat-trick has only been achieved once in Formula E history – by Buemi in Beijing Season 2 – and that no driver finishing in the top 10 has set fastest lap this season, it’s safe to say that Bird will not be clearing a space in his trophy cabinet for the Formula E gong come July 31.

How Rosenqvist can win it

With a four-point advantage over Bird, Rosenqvist has the dubious benefit of not requiring either of the fastest lap bonus points, while winning both races from pole (and Buemi not scoring), in his unlikely quest to win the title as a rookie.

Even if his title hopes are nothing more than a pipe dream, the pace of Rosenqvist’s Mahindra – and that of Bird’s DS Virgin Racing machine – mean that they are very likely to be in among the fight at the head of the field and that could be crucial in the battle between Buemi and di Grassi.

How di Grassi can win it?

Even though the gap between Buemi and di Grassi is 10 points, Buemi’s superior head-to-head record (he has six wins to di Grassi’s one) means di Grassi has to out-score his rival by 11 points to be crowned champion.

A perfect 58-point return would be enough regardless of what Buemi does, and so would two wins from two poles even if Buemi snaffled up the fastest lap bonuses.

Given that Buemi has been averaging a phenomenal 19.6 points a race this season, anything other than a win and a podium over the two races is unlikely to be enough for di Grassi, while if Buemi wins race one, anything lower than fifth place would spell the end of di Grassi’s hopes.

How Buemi can win it?

There are a whole host of scenarios in which Buemi can become champion. The most simple is to finish ahead of di Grassi in both races, but unless di Grassi is winning, finishing directly behind him will also be enough to retain the title.

In the most basic of terms, Buemi needs to score 47 points to deny di Grassi any hope whatsoever. This is the equivalent of a win, a pole, a second and a fastest lap. In reality, he’s unlikely to need such a big points haul. If di Grassi scores at his average rate of 14.7 points per race, 20 points will suffice for Buemi. That’s the equivalent of a pair of fifth place finishes.

However, as the two previous Formula E title deciders have shown, form can often be thrown out of the window in these situations, so don’t discount Bird and Rosenqvist just yet!

Jul 26, 2017Blagojce Krivevski
Report: more than $80B will be spent on global EV infrastructure development by the end of 2025Tesla reclaims top Consumer Reports rating after software update