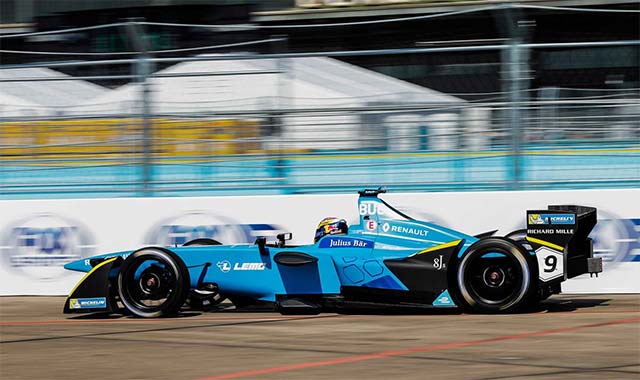 Sebastien Buemi’s sixth win of the 2016/17 Formula E season has opened up a 32-point lead in the championship with four rounds still to go.

Buemi was riding high after back-to-back wins in Monaco and Paris, however, a set-up tweak ahead of the first of the two races in Tempelhof Airport, left him a lowly 14th on the grid.

He charged his way up the order to finish sixth on the road (which became fifth when Jean-Eric Vergne was penalised for an unsafe release in the pits). However, following post-race checks it was found that the tyres on both his cars were under the regulated minimum pressures, and he was excluded from the results.

By reverting to the previous set-up overnight, Buemi’s Renault e.dams was a much more competitive machine in the second race, and while he couldn’t quite match the raw pace of Felix Rosenqvist, when the Mahindra driver picked up a 10-second penalty for another unsafe release, Buemi secured his 12th Formula E win to date.

Buemi is eluding to the potential clash he has on the weekend of the New York double-header, which may cause him to miss the race.

In this event, his lead in the championship will be under pressure. However, even in the worse case scenario he will go into the season finale in Montreal a maximum of 26 points in arrears. But the likelihood is that is will be considerably less than that.

Only one driver – Lucas di Grassi – can possibly overtake Buemi in the points over the New York City weekend. In Formula E history (29 races) only once has a driver achieved the ‘grand slam’ ie Julius Baer Pole Position, the race win and the Visa Fastest Lap, for a maximum haul of 29 points.

In fact, so far this season, the Visa Fastest Lap bonus point is yet to go to the winner – or even anyone in the top 10. In Hong Kong, Felix Rosenqvist rescued a point on his debut after he’d clipped the wall and damaged his car during the first stint.

In Marrakesh Loic Duval’s car suffered a number of technical glitches that caused it to stop on track, but he was fast enough when it worked to set the fastest tour. In Buenos Aires it was Rosenqvist again, making amends for his car cutting out in the pits.

Buemi’s sole fastest lap of the season came in Mexico City where he was recovering from a spin that dropped him out of the points, while Sam Bird recorded back-to-back fastest laps in Monaco and Paris in races that were otherwise forgettable for the DS Virgin Racing driver.

Mitch Evans sustained opening-lap damage that led him to concentrate on scoring Panasonic Jaguar Racing’s first Visa Fastest Lap in Race 1 in Berlin. And the self-same thing played out for Maro Engel in Race 2.

So assuming this pattern continues, that means in reality there’s only 56 points up for grabs. Six of those will go to the driver(s) who set the Julius Baer Pole Position over the two races. Prior to this season, di Grassi had never started from pole in Formula E, but he’s reversed that trend this season, staring at the front two times in eight races.

But while the odds are in his favour of starting at least one of the two New York City races from pole, the chances of converting that pole into the win are much longer. In fact, of the eight races so far this season, only twice has the pole man gone on to win the race – and guess who it was who did that? Correct! Both races won from pole went to Buemi – Monaco and Paris.

However, with the exception of the two poles scored by the NextEV drivers – in Hong Kong and Mexico City – the driver starting on pole has gone on to finish on the podium in every race this season. So if di Grassi starts from pole both times in New York and converts those poles into a podium finish, then he will leave the States in the lead of the championship – assuming Buemi is unable to compete.

But regardless of the result and whether he races or not, Buemi will head into the season finale with at the very worst a strong fighting chance of defending his title.