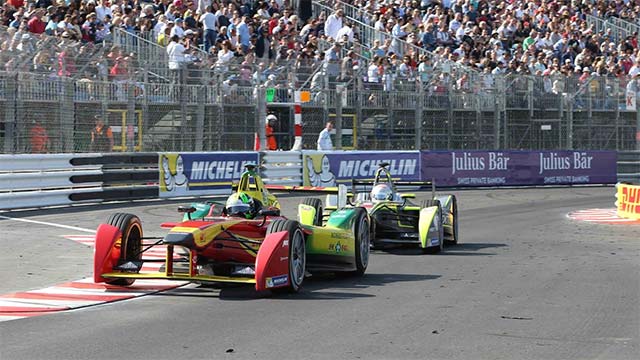 Formula E returns to Monaco for the fifth round of the 2016/17 championship. The most famous and historic street circuit of all is the perfect venue for the start of the European season.

A little over a month has passed since the last installment of the championship, where in Mexico Lucas di Grassi pulled off one of the greatest comebacks of all time to end Sebastien Buemi’s perfect start to the season. With the championship lead now just five points, there’s everything to play for on Saturday afternoon.

The story so far

Buemi’s perfect start over the opening three race was brought to a crushing halt by di Grassi’s brilliant drive in Mexico. The Season 2 champion still leads the way, but the Brazilian is now just five points behind.

The ultra-consistent Nico Prost holds third, but back-to-back second places have brought Jean-Eric Vergne onto the verge of entering the championship fray. His second podium of the season has moved Sam Bird into fifth place in the standings, while his first no-score of the season dropped impressive rookie, Felix Rosenqvist, to sixth.

In the teams’ standings Renault e.dams is still well out in front, with Abt Schaeffler Audi Sport putting up the fight in second. The most significant change in Mexico was Panasonic Jaguar Racing claiming its first-ever Formula E points courtesy of fourth and eighth places for Mitch Evans and Adam Carroll respectively.

The Monaco ePrix circuit is a shortened version of the classic Grand Prix layout, which has been hosting races in one form or another since 1929.

The Formula E version takes a hard right at Ste Devote rather than carrying on up the hill to Monte Carlo. From here the track loops back down behind the pits and rejoins the GP layout at the chicane at the exit of the tunnel.

The remainder of the circuit follows the traditional route around the Swimming Pool, through Rascasse and Antony Noghes and back to the start/finish straight.

At just 1.75 kilometres it’s the shortest track on the calendar, and as a result has the potential to be one of the quickest races to date too. In Season 1 Buemi won the race from pole position, becoming the first driver to do so – and Formula E’s first double race winner – in the process.

There was an epic battle for second place between di Grassi and Nelson Piquet Jr, while just 13 cars finished the race – the fewest in Formula E thus far – after a huge opening lap crash involving an airborne Bruno Senna eliminated five cars.

Monaco-based Venturi has a long and interesting history that can be traced back 1984 and includes a single season in Formula 1 in 1992, countless electric land speed record attempts, and daring Antarctic exploration.

It’s been a part of the championship since the beginning and has scored two podiums through Nick Heidfeld and Stephane Sarrazin, with Sarrazin securing its sole Julius Baer Pole Position for the Season 1 finale in Battersea.

Sarrazin won that race on the road, but had exceeded his energy usage and was given a post-race penalty. Both he and new team-mate Maro Engel were in the points in the Season 3 debut in Hong Kong, but neither have troubled the scorers since. However, Engel was an impressive second fastest after making his first-ever Super Pole appearance in Mexico, although a gearbox penalty meant he started in 12th.

The Principality of Monaco is a sovereign city state with an area of just 0.78 sq miles (2.02 sq km). Its official population is just under 40,000, which makes it the most densely populated country in the world. It’s also the second smallest (only the Vatican City is smaller).

The official language is French, although Monegasque – which is a dialect of Ligurian – is widely spoken, as are English and Italian.

Tourism is the country’s primary industry, although the banking industry – helped no doubt by its tax haven status – has flourished recently. For many years it has been a home for a large community of racing drivers, with Formula E racers di Grassi, Piquet, Esteban Gutierrez, D’Ambrosio, Rosenqvist and Engel, all currently based there.

Despite its small number of residents, over 100,000 cars travel in and out of Monaco each day. This has caused the air pollution to be rated at 80, which is considered Moderate. Most of its energy comes from France, where around 75 per cent of electricity is generated by nuclear power.

The Monaco government provides a subsidy of 30 per cent on the purchase of electric cars, and there are some 423 charging points dotted around the country. There is a fully integrated public transport system, with bus fares just €1.