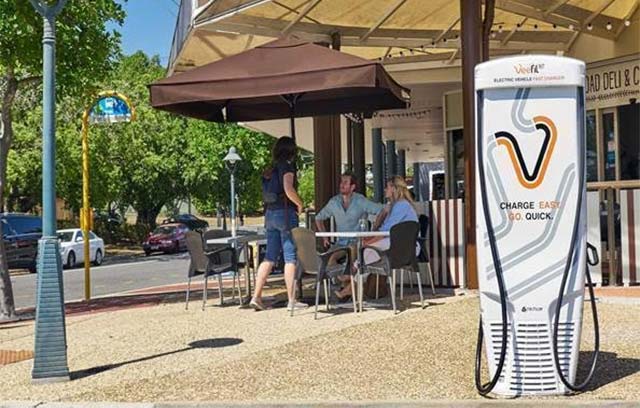 Tritium, the Australian technology company that develops and manufacture of electric vehicle charging infrastructure, has announced it is expanding into the UK market with its award-winning range of Veefil fast chargers, and has signed its first UK distributor, Electric World Enterprises Ltd (EwE).

Since its launch in 2013, the Veefil-RT 50kW DC has become recognised as the world’s most technologically-advanced fast charger in its class and has rapidly developed a global presence with installations in 18 countries currently.

Tritium’s Commercial Director, Paul Sernia, explains why the company is now focusing on the UK: “We’ve been watching the UK market for some time and expect to see an increase in the sale of EVs in the near future as the next wave of models is launched.  The UK is an ideal EV market, given its size, typical short driving distances and the Government’s interest in developing first-rate infrastructure. Our products also have some unique features such as their very small footprint which ideally suits the narrow roads of some UK towns and cities, and we see a lot of potential for us there.

“Culturally, Australia and the UK are very similar; Australian products are well received and it’s an easy country for us to conduct business in. It’s a good time for us to gain traction in this market, and offer customers our high-quality, high-performing product.

“We’ve appointed our first UK distributor, EwE, based in London, who are passionate about improving the environment and cutting pollution from combustion engines, and their first shipment of Veefil-RT fast chargers has just been delivered.  There’s a lot of growth still to happen in the UK and so we are actively seeking more local sales and distribution partners to help us service this market.”

EwE first came into contact with Tritium at a trade show in Germany: “We were actively looking for the best fast charger on the market,” explains EwE’s Commercial Director Mathew Collins.  “We were attracted to the Veefil because of its advanced technology that reduces maintenance and gives it a long life; its light weight and small footprint that means it can easily fit into an existing parking space; and its very attractive design that can incorporate high-visibility corporate branding.  We spoke to some of Tritium’s customers, such as ChargeNet, Fortum and E-Wald and decided the Veefil would make an impact in the UK.”

One of EwE’s key targets is the fleet sector: “EwE is positioned to participate as the industry develops, evolves and introduces the next generation of disruptive technology to achieve mass adoption of EVs”, comments Collins. “International research shows that the conversion to use EVs by businesses is motivated by the considerable cost savings achieved by Fleet Managers and organisations when they convert to electric. We’ve already commenced initial discussions and negotiations with several key industry stakeholders.”