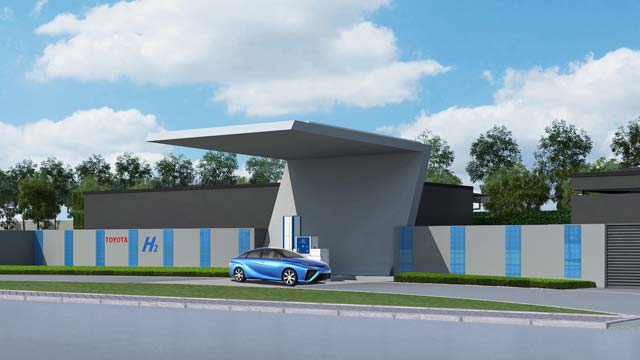 Toyota Motor Corporation will send two “Mirai” fuel cell vehicles to China in October 2017 to conduct demonstration tests in the country. Coinciding with the start of these tests, Toyota will also establish a hydrogen station at TMEC, its Chinese research and development base.

Toyota is participating in the Accelerating the Development and Commercialization of Fuel Cell Vehicles in China project, and will carry out demonstration tests on the Mirai FCV for three years between 2017 and 2020. Specifically, Toyota will conduct research into vehicle performance within the environment in China, research into the quality of China’s hydrogen, as well as a variety of quality and durability evaluations. Toyota will engage in promotional activities and attempt to gauge how receptive Chinese consumers are to the vehicle, such as by exhibiting the Mirai at domestic events in China, and to also undertake activities which are aimed at improving public understanding of FCVs.

There are presently five hydrogen stations in China which are centered in the metropolitan regions of Beijing, Shanghai and Guangzhou. The hydrogen station which Toyota plans to construct at TMEC will be the first of its kind in Changshu. Through this project, Toyota will work together with the Chinese government and other business organizations within the industry to explore the potential for the creation of a hydrogen-based society.

For Toyota, the Mirai is the ultimate eco-car: its zero CO2 emissions result in outstanding environmental performance; it boasts the same convenience as a gasoline powered vehicle in terms of refilling time and cruising range; and it provides the joy of driving in abundance.

Between December 2014 and February 2017, an approximate total of 3,000 units of the Mirai sedan has been sold across Japan, the United States and Europe―regions and countries where hydrogen infrastructure is expanding. Toyota is also proceeding with demonstration tests in countries such as Australia, the U.A.E., and Canada.

For years, Toyota has advanced the development of various types of eco-cars such as hybrid vehicles, plug-in hybrid vehicles, electric vehicles and FCVs in a manner that leverages the strengths of the different systems. At the same time, Toyota has also been actively engaged in efforts to encourage the widespread ownership of these environmentally-friendly vehicles.

In October 2015, Toyota commenced sales in China of the Corolla Hybrid and Levin Hybrid models, both of which features Chinese locally produced hybrid units. As of the end of March, Toyota has sold a total of 90,000 units of both the hybrid models, and this corresponds to 15% in sales of both the Corolla and Levin models together. Plug-in hybrid variants of the Corolla and Levin are scheduled for release in 2018. In addition, Toyota is currently in the process of formulating plans for the introduction of electric vehicles in the Chinese market in the future.

Citroen Ami is an electric quadricycle for €6,000

BMW iNEXT in the hottest phase of its series development