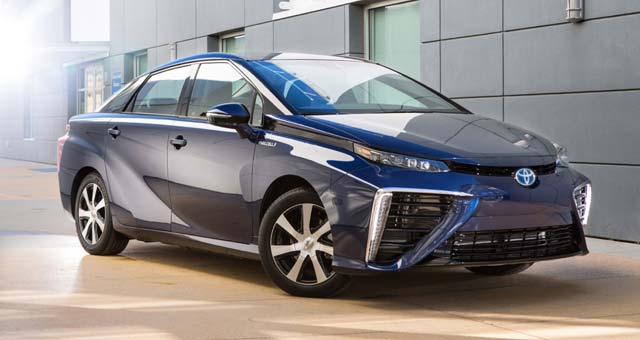 The new 2016 Toyota Mirai hydrogen fuel cell electric vehicle will offer an EPA-estimated 67 miles per gallon equivalent (MPGe) city/highway/combined when it hits dealerships in California this fall, and an EPA-estimated driving range rating of 312 miles on a single fill of hydrogen.

Toyota North America CEO Jim Lentz announced the EPA-estimated performance figures at the Aspen Ideas Festival in Aspen, Colorado.  Mirai is the only zero emission electric vehicle on the market that tops the 300 mile range milestone.

“Toyota realized in the early 90’s that electrification was key to the future of the automobile,” said Lentz.  “Just as the Prius introduced hybrid-electric vehicles to millions of customers nearly twenty years ago, the Mirai is now poised to usher in a new era of efficient, hydrogen transportation.”

Toyota Mirai is a four-door, mid-size sedan with performance that fully competes with traditional internal combustion engines – but uses no gasoline.  Instead, Mirai creates electricity on demand using hydrogen, oxygen and a fuel cell, and emits nothing but water vapor in the process.

– Three years’ worth of complimentary fuel

– ToyotaCare, standard no cost service plan and roadside assistance, is enhanced for Mirai and offers:
– No cost scheduled maintenance for three years, or 35,000 miles, whichever comes first.
– No cost enhanced roadside assistance for three years, regardless of mileage, including expedited towing service and trip interruption reimbursement at a maximum of $500 per day for up to 5 days per incident.

Customers can take advantage of Mirai’s $499 per month/36 month lease option, with $3649 due at lease signing, or purchase the vehicle for $57,500.  With combined state and federal incentives of $13,000 available to many customers, the purchase price could potentially fall to under $45,000. Both options come with free hydrogen fuel for “up to three years.”