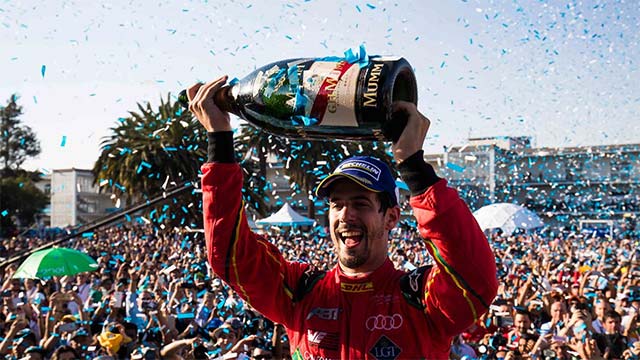 Formula E races aren’t supposed to be won like this. Pitting on lap 17 of a 45-lap race should make managing the energy to the end too much of a compromise between saving and speed. But then, cars that suffer a hit so big that they require a new rear wing aren’t supposed to win races either. And drivers who start 18th most assuredly should not be in the final reckoning.

Yet all of these three things applied to Lucas di Grassi, who drove a simply magnificent race – aided in no small part by some inspired calls from the ABT Schaeffler Audi Sport pit crew – to not only end Sebastien Buemi’s three-race winning streak, but to close the championship lead down to just five points. As the series heads to Europe, it’s game on in the title race.

“What an incredible change of fate, but actually that’s what Formula E represents, there are such ups and downs,” said di Grassi. “You can have a bad weekend or good weekend – the level of the drivers is so high. Somebody crashed into my back, broke the rear wing and there was a safety car. I managed to open a gap, keep on just using regen, just trying to be as energy efficient as possible, just focussing on my race as much as possible until the last corner and then just celebrated like crazy. For me it was one of the best races of my life, in terms of how I drove, how energy efficient I had to be, so I’m very pleased.”

Having pitted so far off sequence, and taken full advantage of two of the three Qualcomm Safety Car periods, he found himself with a comfortable 30-second lead. The drivers behind would have a lot more energy and would definitely be quicker. But could he go fast enough to keep them at bay?

That became irrelevant when Loic Duval’s Faraday Future Dragon Racing car suffered a battery glitch and stopped on track. The safety car was deployed for the final time, but now di Grassi’s lead was gone.

However, behind him Jerome D’Ambrosio was running a similar strategy, and last year’s winner was in no mood to give up his second place. For lap after lap he kept the TECHEETAH of Jean-Eric Vergne at bay. Eventually the Frenchman found a way through, but by now it was the final lap and even though he scythed into di Grassi’s lead, he simply ran out of time to catch and pass.

A superb drifting move around the outside into the Turn 3 right-hander took Sam Bird by D’Ambrosio too and into third place on the last lap. The DS Virgin Racing driver had been in the thick of the action throughout the race, and he was very happy to have scored his second podium of the season.

Nick Heidfeld had been among the front runners from the start and was looking good for a solid finish. However, on the penultimate lap he was tapped into a spin by Nico Prost. As he sat broadside across the track his Mahindra team-mate Felix Rosenqvist was left with nowhere to go and the two red and white cars collided eliminating both from the race.

This was a huge boost to Mitch Evans, who duly inherited fourth to score Panasonic Jaguar Racing’s first points, and with Adam Carroll taking eighth it was a great day for Formula E’s newest manufacturer.

Prost brought his Renault e.dams home in fifth to reinforce his third place in the points standings. Sixth went to Jose Maria Lopez for the best result of his DS Virgin Racing career. The Argentine ran second in the opening stages, as Julius Baer Pole Position winner Oliver Turvey made a great start to lead away for NextEV NIO.

On his 30th birthday, the Brit was having a great run out in front when without warning his car suddenly stopped. This was the cue for di Grassi’s game-changing stop and also moved Lopez into the lead of a Formula E race for the first time. However, when he tried to pull a move on D’Ambrosio after the mandatory car change he locked up and spun at Turn 1.

Daniel Abt was fastest in qualifying, but following routine checks it was discovered that his tyre pressures were too low and his times were disqualified sending him to the back of the grid. He fought his way up the order to finish seventh, just ahead of Carroll.

After a poor qualifying, Nelson Piquet Jr. kept out of trouble to finish ninth, while to the delight of his vociferous home fans Esteban Gutierrez marked his debut for TECHEETAH with a point for 10th place.

Buemi was running in the top-six until a slow pitstop dropped him outside of the points. He was using his FanBoost to fight back when he made an almost identical error to Lopez and spun out. Small consolation came in the form of bagging the bonus point for setting the Visa Fastest Lap.

Now the series returns to the most famous street racing venue of them all – Monaco. It was Buemi who was victorious there in Season 1 – becoming the first driver to win from pole in the process. So far this season, the pole man is yet to win at all, but whether the winner will start from 18th on the grid ever again is surely almost impossible.