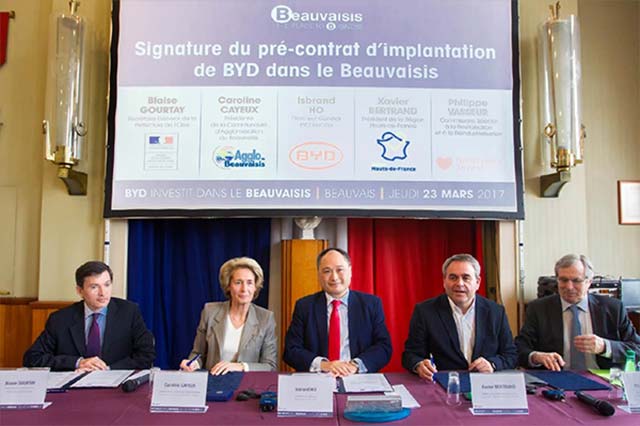 Chinese electric carmaker BYD has announced its decision to invest €10 million into a second electric bus assembly site in Europe in a site in the town of Allonne, near Beauvais, in Hauts-de-France.

The project calls for around 100 jobs to be created in the initial phase. The production facility will occupy 32,000 sq m of a parcel totaling nearly 80,000 sq m, and will assemble up to 200 vehicles a year—single-deck buses and coaches—in its first phase. Other vehicles may be added as BYD expands its product line.

Production is scheduled to get underway in the first half of 2018. In addition to bus assembly, BYD plans an after-sales unit for maintenance and repairs, as well as a logistics center for spare parts. In the longer term, a test center for batteries could be added.

Isbrand Ho, Managing Director of BYD Europe, said “We chose France because it has Europe’s largest bus market. And we selected Beauvais and the Hauts-de-France region because of the quality of the building proposed to us, the region’s ideal location, and the proactive approach of local and regional authorities. I would like to take this opportunity to extend my personal thanks to the representatives of the Hauts-de-France region, the Beauvais Conurbation, Nord France Invest and Business France.”

He explained BYD vision: “We want to contribute to cleaner air in large cities. Diesel-powered urban buses are not only one of the leading sources of air pollution, they are also one of the vehicle categories that is easiest to electrify, since they travel along clearly identified routes. We anticipate a significant rise in sales of electric buses in Europe, and particularly in France, Europe’s largest national market.”