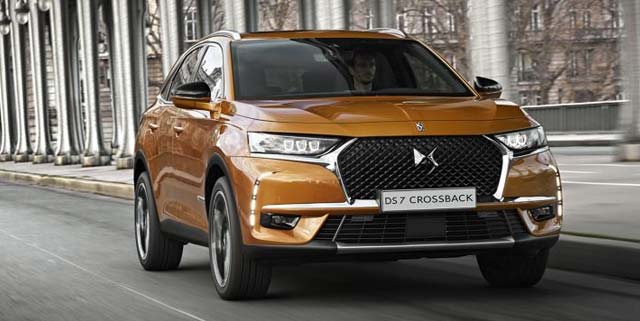 Citroen began badging some of its cars with the upmarket DS monicker in 2014, but the DS 7 Crossback SUV is the first car designed as an independent DS model for 62 years and becomes the brand’s flagship car.

With its LED light signatures, unique interior stitching techniques, and the motorised watch by B.R.M placed on the dashboard, as featured on DS E-TENSE concept, DS 7 CROSSBACK represents the brand’s vision for the future. 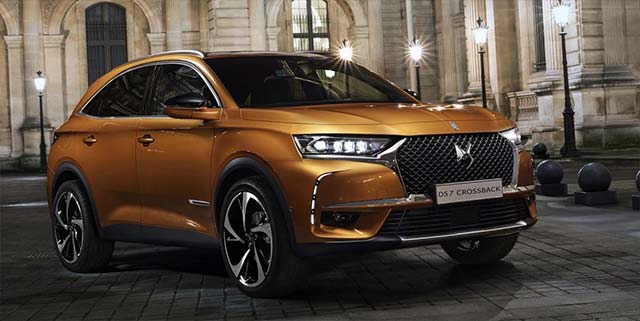 The SUV will be available from spring 2019 with a plug-in hybrid petrol drivetrain with 300hp and 4WD, a new latest-generation Efficient Automatic Transmission with 8-speeds, a THP S&S 225hp engine and two electric motors.

The additional energy supplied by the two electric motors (up to 80kW each and 90kW combined) to the petrol engine takes power available to 300hp.

The plug-in hybrid DS 7 CROSSBACK has three possible operating modes: 100% electric, hybrid, or combined. The battery regenerates when the vehicle decelerates (throttle off or while braking). 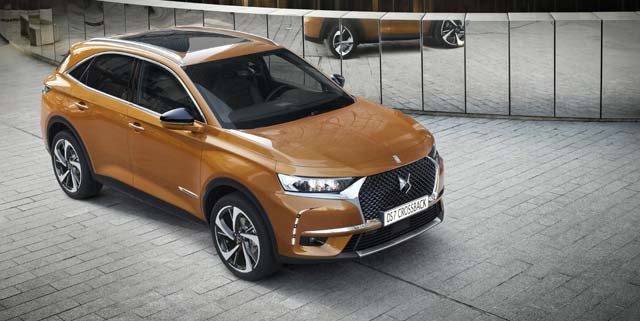 In all-electric use, the 13kW/h battery delivers range of up to 37miles (60 km). This efficiency is helped by optimised aerodynamics.

In standard mode, charging takes 4½hours. In fast mode, it can take less than 2½hours, with a 6.6kW charger that plugs into a 32A socket.

Alongside the E-TENSE hybrid, DS 7 CROSSBACK will ultimately be available with a choice of five powerful, highly-efficient, high-torque internal combustion engines compliant with the Euro 6.2 standard and will also premiere the new-generation Efficient Automatic Transmission with 8-speeds (EAT8): three petrol power units (THP 225 S&S EAT8, THP 180 S&S EAT8, PureTech (twice voted engine of the year in 2015 and 2016) 130 S&S 6-speed manual) and two Diesel units (BlueHDi 130 S&S – with a choice of 6-speed manual or EAT8 – and the BlueHDi 180 EAT8). 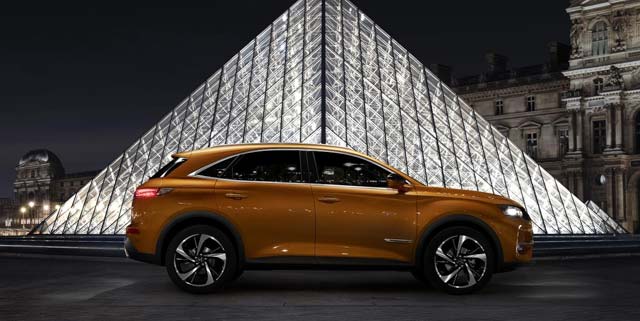 These engines endow DS 7 CROSSBACK with a broad-range of character and performance. The state-of-the-art technologies (injection pressure of 200bar for the THP engine, Stop&Start systems, etc.) keep CO2 emissions on a par with the best-in-class.

The EAT8 offers fuel savings of 4% compared with the preceding 6-speed automatic gearbox, due to a new control strategy, a Stop&Start function activated at speeds of up to 2mph, and weight savings of around 2kg.

The EAT8 transmission delivers fuel savings by keeping engine speeds as low as possible, and contributes to driving pleasure with its new quick gear-changing strategies. It is also compatible with the autonomous driving functions on DS 7 CROSSBACK: DS PARK ASSIST and DS CONNECTED PILOT. 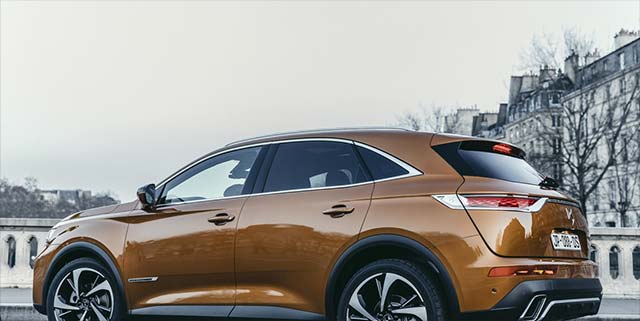 DS CONNECTED PILOT makes it possible to delegate driving and also to take back control at any time. The system features Stop & Go Active Cruise Control, which adjusts vehicle speed accordingly to the car in front. This function acts on the steering to precisely position DS 7 CROSSBACK in its road lane, respecting the driver’s choices and habits.

Active at speeds of up to 112 mph (180 km/h) according to national speed limit legislation, it controls the vehicle and course for the driver. Particularly useful in traffic jams or on the motorway, this function contributes to safety, efficiency and peace of mind at the wheel of the DS 7 CROSSBACK.

The on-board camera of DS CONNECTED PILOT recognizes broken and unbroken road markings. While driving, it continuously analyzes the image of the road ahead to understand the vehicle’s situation. If DS 7 CROSSBACK deviates from the road markings or accidentally crosses a white line, the system gently moves the wheel slightly in the opposite direction to keep it on course. If the driver wishes to maintain the vehicle’s trajectory, he or she can cancel the corrective maneuver by keeping a grip on the steering wheel, particularly if or when taking action to avoid a potential collision. 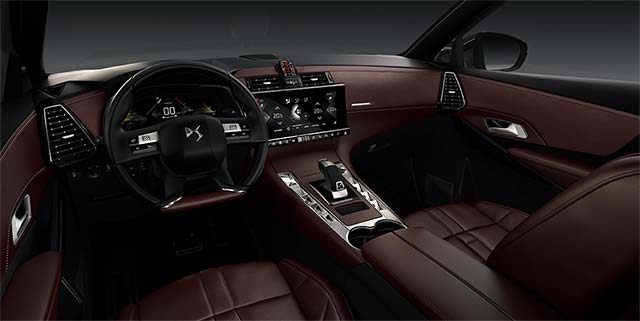 The corrective maneuver is also interrupted if the indicators are activated. This function is activated from 18mph and is then operational between 0 and 112mph. This system is also able to manage DS 7 CROSSBACK in traffic jams: the car restarts automatically without driver action.

DS PARK PILOT is able to identify a parking space corresponding to the dimensions of DS 7 CROSSBACK simply by driving past spaces at a speed of up to 18 mph (29 km/h). The driver then uses the touchscreen interface to indicate how he or she wishes to park in reverse with a parallel or bay parking maneuver. The ultrasound sensors of DS PARK PILOT, built into the lower part of the bumpers at front and rear, control and steer the car automatically. To ensure safety, the driver can take back control of the vehicle at any time by releasing the button on the gearbox. All the driver needs to do is press the Park button and wait for DS 7 CROSSBACK to park itself.

With this new parking aid, the driver does not need to manage acceleration, braking or gear changes, when entering or leaving a parking space. With DS PARK PILOT, active at speeds of up to 3 mph (5 km/h), DS 7 CROSSBACK is able to park seamlessly, in line with the vehicles around it.