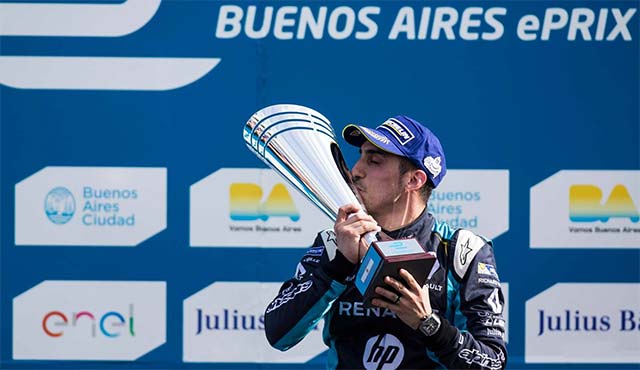 Another ePrix, another first place for Sebastien Buemi. Switzerland’s Sebastien Buemi has made Formula E history by becoming the first driver to win three races in a row.

Victory for the Renault e.dams ace continues the perfect start to his title defence. It was his ninth win in the all-electric street racing series, and the 12th for the team. That means Renault e.dams have now won half of all the Formula E races that have taken place.

But, in front of 21,000 enthusiastic fans, Sebastien Buemi had to work hard for his victory. From his first-ever Julius Baer pole position, Lucas di Grassi (ABT Schaeffler Audi Sport) led away at the start, while Jean-Eric Vergne slotted his TECHEETAH into second place.

Di Grassi was struggling with his car, and in quick succession he was passed by Vergne and then Buemi. TECHEETAH uses the same powertrain as Renault e.dams, but there was nothing Vergne could do to stop Buemi charging by into the lead.

Further back di Grassi had slipped behind the impressive NextEV NIO of Oliver Turvey and the second Renault e.dams of Nico Prost as his struggles intensified.

By the time of the mandatory car change pitstop, Buemi was almost six seconds to the good and seemingly set for an easy win. But the brake balance of the second car was far from his liking, and struggling to slow the car in a straight line, his pace dropped off, allowing Vergne back into the hunt.

Di Grassi too was now a contender. A slow stop for Turvey dropped him out of the podium fight, while an aggressive pass on Prost moved di Grassi back into the top-three. With the car handling much more to his liking he was closing in on both Buemi and Vergne, but the gap was too big for him to overcome.

Three wins in a row has increased Buemi’s points lead to a huge 29 points. And after two previous disappointments at the Puerto Madero track, he was delighted to take another win.

Despite never getting close enough to pressure Buemi for the win, Vergne was very pleased to take second – the first podium finish for the new TECHEETAH team.

Another podium for di Grassi – his 15th in total – keeps him in second place in the championship, but he knows he and his ABT Schaeffler Audi Sport team will have their work cut out to overthrow the dominant Buemi.

For the third race in a row Nico Prost took fourth place for Renault e.dams. Season one champion Nelson Piquet Jr. claimed his best result since his title-winning campaign with a strong fifth for NextEV NIO, while behind him waged a fabulous battle for the remaining points-paying positions.

The championship now moves to Mexico City and the historic Autodromo Hermanos Rodriguez, where round four of the 2016/17 season takes places on April 1.