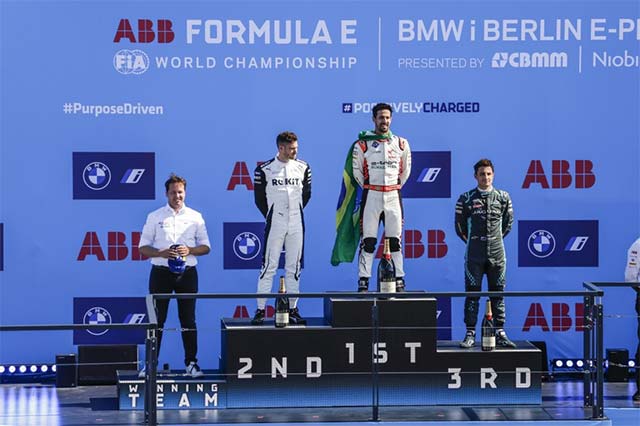 Lucas di Grassi (Audi Sport ABT Schaeffler) fired himself into the championship mix with a stunning victory in the BMW i Berlin E-Prix Round 14, fending off ROKiT Venturi Racing’s Edoardo Mortara by a tenth of-a-second while Mitch Evans (Jaguar Racing) rounded out the podium.

The Brazilian measured his use of the 35kW ATTACK MODE boost to perfection to pip ROKiT Venturi Racing’s Edo Mortara over the line. Di Grassi started third on the grid behind a front-row lock out by DS TECHEETAH’s Jean-Éric Vergne and António Félix da Costa.

The DS drivers then lost out to the charging Audi duo, led by di Grassi, with teammate Rene Rast flying from 12th to second spot. After the Audis hit the front, ROKiT Venturi Racing’s Edoardo Mortara and Norman Nato then jumped the pair through their ATTACK MODE boost. Da Costa slipped to an eventual sixth and Vergne seventh, while Rast’s charge wouldn’t last as he fell to ninth.

Di Grassi was late to take his ATTACK MODE activation and the wily racer made it count. He passed Nato then Mortara in the closing stages and held off the latter over the line for the race win with Evans steering to an impressive third from seventh on the grid ahead of Nato fourth and Jake Dennis (BMW i Andretti Motorsport) fifth.

Standings leader Nyck de Vries (Mercedes-EQ) failed to finish, retiring to the pit-lane but through it all, he holds his advantage atop the Drivers’ World Championship, with Mortara rising to second, just three points back while Dennis sits third. Sam Bird suffered, too; his Jaguar stopping on the start-finish with a technical issue, marking a third consecutive DNF just as the Brit had a sniff of points.

Despite that, Evans’ podium was enough to see him fourth in the Drivers’ and Jaguar rise to the top of the Teams’ table, ahead of DS TECHEETAH by five points.

More than half the grid can still win the title, while the top seven in the Drivers’ World Championship, down to reigning champion Da Costa, are split by just nine points.

The 2020/21 ABB FIA Formula E World Championship draws to a close with both titles still up for grabs tomorrow, August 15 at 15:33 CET when the inaugural ABB FIA World Champions will be crowned.