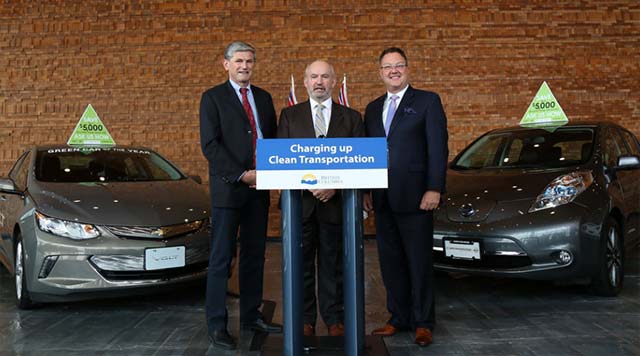 The funding for the Province’s Clean Energy Vehicle (CEV) Program will be distributed over the next three years to support continued point-of-sale purchase incentives of up to $5,000 for battery electric vehicles and $6,000 for hydrogen fuel cell electric vehicles. When combined with SCRAP-IT program incentives, total savings could be up to $11,000 for a new electric vehicle.

Programs funded within the $40 million are also under development to:

– Increase public awareness of the benefits of ZEVs.

The vehicle price cap established for the CEV Program in March 2016 remains in effect – vehicles priced above $77,000 are ineligible for purchase incentives. The vehicle incentives will continue to be administered and delivered by the New Car Dealers Association of British Columbia.

The funding provides more money per year to meet growing demand for rebates on vehicles and specialty-use vehicles, and supports the expansion of charging stations, hydrogen fuelling stations and the development of new research and training programs, fulfilling the Province’s undertaking in the Climate Leadership Plan to expand the CEV Program to support new vehicle incentives and infrastructure, as well as education and economic development initiatives.

Continued, stable funding for the Clean Energy Vehicle Program supports the growth of B.C.’s zero-emission vehicle sector, creating jobs and economic opportunities for companies and organizations involved in all aspects of the supply chain – from raw materials to final consumer products – related to vehicles or vehicle components, fuel and charging infrastructure and transferable technologies and services.

The Province introduced the CEV Program in 2011 and – including today’s announcement – has since committed more than $71 million for vehicle purchase incentives, charging and hydrogen fuelling infrastructure, vehicle fleet programs, public outreach, and research and training.

– B.C has the highest ratio of ZEV sales to non-ZEV sales in Canada with over 4,800 ZEVs on the road.
– B.C. has the largest charging network in Canada with over 1,100 public, Level 2 charging stations and 30 fast-charging stations.
– Each electric vehicle on the road in B.C. displaces four tonnes of carbon dioxide emissions annually.
– Eligible electric and hydrogen fuel cell vehicles displaying an official decal are allowed in high occupancy vehicle (HOV) lanes throughout the province regardless of the number of passengers in the vehicle.
– In 2015, the ZEV sector in B.C. encompassed 198 companies, employed approximately 3,850 full-time equivalents, and contributed approximately $700 million in total direct economic activity.