Renault Trezor Named Most Beautiful Concept Car of the Year 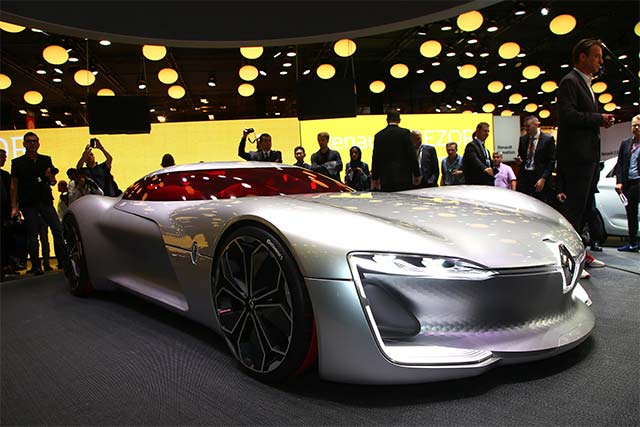 The all-electric Renault Trezor Concept that debuted at the 2016 Paris Motor Show was just voted as the Most Beautiful Concept Car of 2016 by the Festival Automobile International.

“The jury decided this award should go to the TreZor because of the extreme beauty, sensuality, and elegance it exudes,” sais Rémi Depoix, president of the Festival Automobile International, in a press release. “It is the epitome of a concept car and we were notably won over by the cohesion of its overall design and the attention that has been paid to the details. It is a fine creative work which, we hope, will inspire Renault’s future roadgoing models.”

The lines of the Renault TREZOR are warm, sensuous and refined, while its assertive front end incorporates signature C-shaped lights. In terms of their styling, Renault’s upcoming models will draw their inspiration from the TREZOR’s DNA as their forms become even more fluid and mature.

The TREZOR’s interior design, meanwhile, places the emphasis on driving enjoyment and features a large enveloping touchscreen display that reinforces the cockpit feel. This customisable, connected interface juxtaposes warming, prestige materials like wood and leather. The interiors of upcoming Renault models will take their inspiration from these increasingly refined styling trends and connected technologies.

Standing just 1,080mm tall, the Trezor invites occupants to straddle the side of its body as they climb in. This style of entry is a throwback to the world of classic racing cars, where in drivers felt as one with their machines. The sporting and sensual manner of entry is accentuated by the red leather trim for the upper part of the pillar. It looks almost like a saddle, so you might be mounting a steed just as easily as getting into a car. Ingress isfacilitated by automatically reclining headrests.

The Trezor provides another surprise when you climb in, with a dashboard made from red wood that incorporates a luggage compartment at the front of the vehicle. Made-to-measure cases are held in place by leather straps and remind how travel can be an art form.

The Trezor’s motor derives from the Renault e.dams, two-time winner of the Formula E Teams’ world title. With a maximum power of 260kW (350hp) and peak torque of 380Nm, it provides acceleration from stand still to 62mph (0-100 km/h) in less than four seconds.

Feb 6, 2017Blagojce Krivevski
BC drivers can get up to $12K incentive to buy electric carGlobal Plug-in Vehicle Sales for 2016