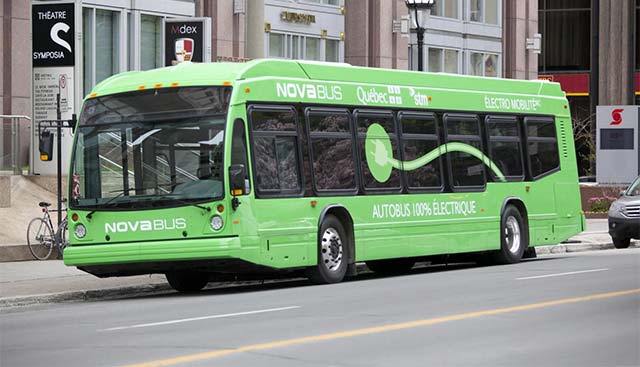 ABB, an engineering company specializing in automotive energy technologies and Nova Bus, the North American buses manufacturer and division of Volvo Buses, announced today a business collaboration that consists of the delivery of the first ABB’s electric bus opportunity charger in North America.

ABB already has opportunity charging systems for e-buses in operation in Europe and to now include North America as reference for the DC fast charger is a defining moment. The order from Nova Bus comprises one complete 300 kW modular common interface charging system with inverted pantograph technology and commissioning from the new ABB Campus in Montréal.

The ABB DC fast charger, with the associated systems, is based on the common interface, which allows charging stations and electrified buses from different manufacturers to be used together and only takes three to four minutes to charge the batteries at the charging station. Electric bus systems based on the OppCharge interface is being implemented in more than 12 countries.

The demo e-bus and charging infrastructure from Nova Bus is scheduled to travel across the USA in the fall of 2017 and encourage transit authorities to jump on board; contributing to the electrification of urban transit.

This collaboration reflects the desire of Nova Bus to keep investing in climate action by offering charging stations and electrified bus solutions to major cities in the United States and Canada.

Since 2010, ABB has sold approximately 5,000 fast chargers around the world for passenger cars and electric buses. Utilization of technology that comprises cloud-based remote monitoring and control as well as program upgrades via Internet guarantees quick response times and a high degree of availability.

Feb 13, 2017Blagojce Krivevski
BMW Group Plug-in Sales Up 115.8% In JanuaryBMW i3 was best-selling plug-in model in Norway in January