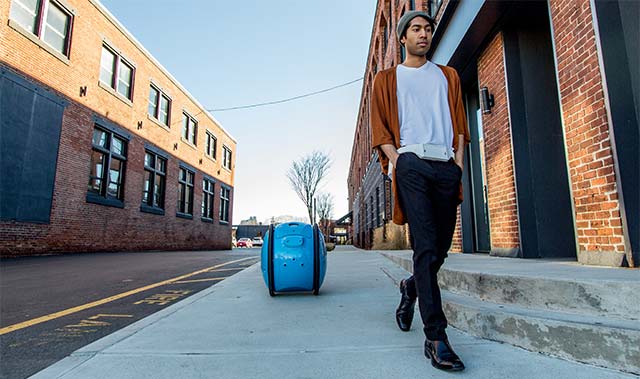 Piaggio Group, the largest European manufacturer of two-wheel motor vehicles, has launched Piaggio Fast Forward, a newly-established company based in the U.S. formed to pioneer the future of light mobility by fundamentally rethinking the movement of people and goods.

Piaggio Fast Forward’s first offering is Gita (pronounced “jee-ta” and in Italian means a “short trip”), an autonomous vehicle that extends a person’s cargo-carrying abilities. Gita is an intelligent vehicle with a communicative personality. It learns and navigates indoors and out with the oversight and decision-making of humans. Gita is able to follow a human operator or move autonomously in a mapped environment.

Gita is 26 inches tall, has a cargo carrying capacity of 40 lbs, and a maximum speed of 22 mph. Gita is designed to travel at human speeds with human agility. Gita has a zero turning radius and is designed to accompany people at speeds from a crawl, to a walk, to a jog, to riding a bike. Instead of deciding to use an automobile or truck to transport 40 pounds worth of packages, Piaggio Fast Forward wants to help people walk, run, pedal and skate through life with the assistance of a family of vehicles like Gita.

Piaggio Fast Forward will privately debut their product on Thursday, February 2nd to an exclusive group of partners and select members of the media.

Boston, Massachusetts-based Piaggio Fast Forward, will be deploying Gita in a variety of B2B pilot programs in the near term, with an eye toward future consumer applications.