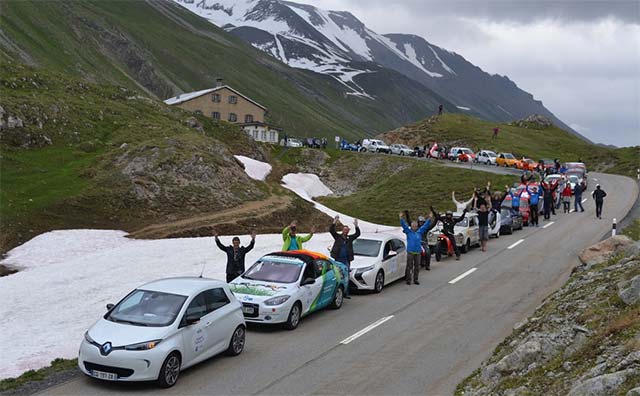 Details of the world’s biggest electric vehicle (EV) rally, the WAVE Trophy 2017, have just been announced.

Hundreds of electric car enthusiasts from all over the world will participate taking on the Alps, mountain passes and the most spectacular sighs of Switzerland.

As well as an adventurous holiday the WAVE Trophy participants will travel around 1,600 kilometers visiting interesting towns, green companies, farms and schools from 9th to the 17th of June. The WAVE Trophy also has a serious goal of raising awareness of green transport and promoting sustainable living.

In addition it is an opportunity for participants to enhance their knowledge about electric vehicles, to network and socialise. More than 90 teams have already announced their interest and the maximum number of participant EVs will be limited to 100. Registration officially ends on 15 March 2017.

2017 will see the WAVE Trophy follow the recently launched road trip “Grand Tour of Switzerland”. From palm-lined lakeshores to sparkling glaciers, from medieval villages to buzzing cities it packs in an incredible number of sights. What is particularly attractive to EV drivers is that the complete route will have charging stations from Spring 2017.

The Grand Tour of Switzerland is said to have the greatest concentration of attractions of a similar distance any where worldwide.  It also has another first – it will be the first official road trip in the world that is EV friendly. The WAVE trophy will support this sustainable transport initiative by offering rental EVs and e-motorbikes and carbon offset to participants travelling long distances to joint the rally.

Following the Grand Tour of Switzerland has lots of advantages for WAVE Trophy participants:

· The daily driving distance will be between 110 and 220 km
· It will be very attractive for people who want to join with their own or a rented e-bike
· It will be very attractive for international teams, as it will be a touristic adventure and worldwide unique experience in absolutely spectacular landscapes!
· There will be no driving on highways, but visiting lots of small attractions and meeting local people along the way
· There will be more time for the teams to spend with each other

Speaking about the 2017 EV Rally Louis Palmer founder and director said “We were particularly attracted to the Grand Tour of Switzerland because participants on previous WAVE Trophy rally’s have found the mountain sections the most interesting and enjoyable.  Also it will be the world’s first electrically-navigable road trip. The WAVE Trophy will take place for the 7th time and participants with their electric vehicles and electric bikes are most welcome. Registration officially ends on 15 March 2017, however, more than 90 teams have already announced their interest and the maximum number of participants will be limited to 100. Also international teams are most welcome, and a certain number of electric cars and e-bikes is available for rent for very reasonable prices.

For highlights of the Grand Tour of Switzerland click here.