Toyota has developed the world’s first method for observing the behavior of lithium ions in an electrolyte when a Li-ion battery charges and discharges.

By using this method, it is possible to observe in real-time, the deviation of Li-ions one of the causes of deterioration in the performance of Li-ion batteries. Toyota believes that this will provide essential guidelines for R&D that aims to improve the performance and durability of batteries, which would lead to longer battery life, as well as longer driving ranges for plug-in hybrid vehicles and electric vehicles. 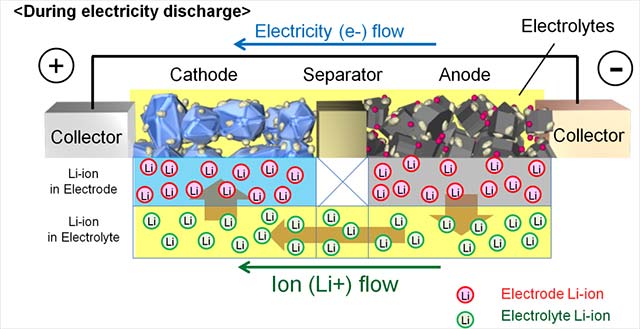 Structure and Principles of an Automotive Li-ion Battery

It has been known that Li-ion deviation occurs in the electrodes and electrolyte as a result of charging and discharging, and such deviation has been believed to limit the usage area of batteries, which is one factor that reduces the area in which the maximum performance of the battery can be achieved. When investigating the mechanism of Li-ion deviation, however, confirming the behavior of Li-ions in the electrolyte under the same environment and conditions as when it is being used in related products was not possible using existing methods.

The two main features of the observation method that Toyota developed to help solve this problem are as follows:

1. The Toyota Beamline in the SPring-8 synchrotron radiation facility, which generates the world’s highest-performance synchrotron radiation, produces high-intensity X-rays that are approximately 1 billion times more powerful than those generated by an X-ray equipment. This makes it possible to create 0.65 micron/pixel high-resolution and 100 ms/frame high-speed measurements.

By using the method described above, and a battery that is similar to that of related products such as laminated cell under the environment and conditions that resemble those of actual battery use, it is possible to observe in real-time, the process of Li-ion deviation that occurs in electrolytes during the course of battery charging and discharging. This observational method was jointly developed by Toyota Central R&D Labs, Inc., Nippon Soken, Inc., and four universities.

Going forward, Toyota will observe the behavior of Li-ions caused by differences in the materials and structures of cathodes, anodes, separators, and electrolytes, as well as the differences in battery control. Analyzing the mechanisms that cause deterioration of battery performance will lead to R&D that can help to improve the performance and durability of batteries, to bring about longer battery life and longer driving ranges.