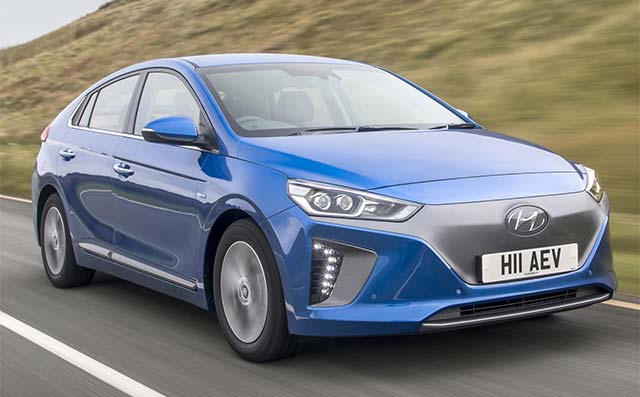 In the test the Hyundai IONIQ achieved top marks in the four categories: Adult Occupant, Child Occupant, Pedestrian and Safety Assist, proving it is one of the safest cars in its segment. The IONIQ features a long list of standard active safety features on all versions including Autonomous Emergency Braking with pedestrian detection, Lane Departure Warning, Lane Keeping Assist and Smart Cruise Control.

Superior active safety is a standard feature of the IONIQ
Euro NCAP tested the IONIQ’s standard-equipment Autonomous Emergency Braking (AEB) with good overall performance. The system alerts drivers to emergency situations, braking autonomously if required. Using front radar and camera sensors, AEB operates in three stages. Initially warning the driver visually and acoustically, it controls the brake according to the collision danger stage and applies maximum braking force just before the moment of collision. When a vehicle or pedestrian is sensed in front of the car, the system is activated, operates at speeds of 8 km/h or above, and avoids a collision or minimises damage when a collision is otherwise unavoidable.

Enhancing the IONIQ’s standard safety features is the Lane Keeping Assist system including Lane Departure Warning. This alerts the driver acoustically and visually if the car crosses road markings without indicating, and applies slight force to the steering wheel in order to guide the driver back to a safe position. The system was thoroughly examined by Euro NCAP and passed all tests successfully.

The Smart Cruise Control, fitted standard in every IONIQ, also contributed to the five-star rating. It maintains a constant speed and distance from the vehicle ahead by accelerating or braking automatically. The Advanced Smart Cruise Control in the IONIQ Electric also enables stop-and-go functionality.

Besides the technologies tested by Euro NCAP, the IONIQ also offers Blind Spot Detection and Rear Cross Traffic Alert. These systems warn the driver of surrounding vehicles, passengers or other objects that may lead to a collision if unnoticed while the car is in motion – a further safety feature of the IONIQ.

Passive safety rounds off the impressive Euro NCAP result
As for passive safety, the light yet rigid body is the result of advanced design, construction methods and materials for the entire IONIQ line-up. Featuring 53% Advanced High Strength Steel, the chassis benefits from superior rigidity for responsive handling and is extremely safe, with high impact energy absorption and minimised distortion in order to protect passengers in the event of a collision. Body structure improvements, complemented by a high-strength fibre-reinforced rear bumper, make the entire IONIQ line-up strong and durable. A total of seven airbags are positioned around the interior of the IONIQ, including a knee airbag for the driver – another factor that was central to the positive Euro NCAP test result.

The IONIQ Hybrid and the IONIQ Electric are now on sale throughout Europe. The IONIQ Plug-in will be introduced in 2017.