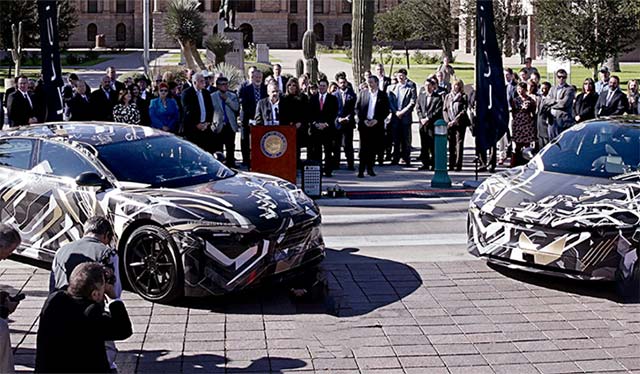 Lucid Motors (formerly Atieva) announced Casa Grande, Arizona, as the location for our cutting-edge automotive factory. The announcement was made at two events, one at the Arizona State Capitol in Phoenix, and another at Casa Grande City Hall.

The site selection process began over a year ago, with Lucid’s team evaluating over 60 potential sites in 13 states throughout the United States.

“In the end, we chose Arizona and Casa Grande for their pro-business mindset, excellent workforce, forward-thinking academic institutions, proximity to our Silicon Valley headquarters, strong regional supply chain, and availability of a suitable property,” said Lucid Motors in a statement.

The Lucid factory program will be overseen by Brian Barron, Lucid’s Director of Manufacturing. Brian is an 18-year veteran of BMW, where he ensured the timely launches of various BMW model lines and managed functional areas in both South Carolina and Germany.

Lucid Motors plan to break ground on a $700 million factory and begin hiring in the first half of 2017. In 2018, the company will begin production of its first model.

Lucid tested its electric powertrain using a modified Mercedes-Benz van, and released a video showing that it could hit 0-60 mph in 2.6 seconds, faster than a “Ludicrous”-equipped Tesla Model S.