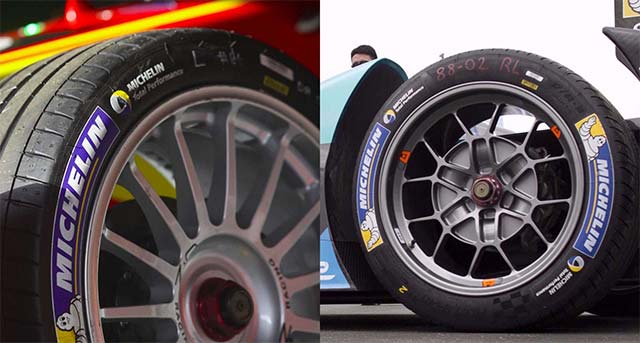 The FIA Formula E Championship has rightly been focused on the electric powertrain development since the rules were opened up for Season Two, leaving the chassis of a fixed specification, aside from one crucial component, the wheels. Perhaps it’s been overlooked that wheel design has also been freed up since the regulation change, this gives the teams an opportunity for performance-related developments to the four 18-inch rims.

At its simplest level the wheel is the component that holds the tyre to the axle, a critical, but perhaps simple task. However, the wheel has several other influences directly related to the speed of the car. Firstly, the wheel forms part of the suspension’s structure, thus the wheel needs to be stiff enough not to upset the action of the suspension. Secondly, as unsprung weight the mass of the wheel will also effect suspension performance, as well as add to the overall weight of the car. These two demands are a trade off in the wheel being strong, but not heavy.

Less obvious is the wheel’s effect on the heat from the brakes, the spoke design dictates how much heat is carried away from the brakes and leads onto how much brake heat is transferred through the wheel into the tyre. This is a crucial factor, Formula E cars run carbon brake discs, peak temperatures can be up to 1000c and the lower range still at some 400c. Running brakes too hot leads to surface oxidation and rapid wear. This can result in catastrophic brake disc failure if the disc wears too thin. Conversely, the brakes being too cold reduces their ability to slow the car, so some heat needs to be retained in the brakes in order to be ready for the next corner. This is a juggling act and the lack of brake ducts and the open nature of the front wheel/upright design prevents teams tuning the brake cooling in the conventional manner.

Lastly, for any image-conscious motorsport, the wheel design is an aesthetic part of the car and can promote both the team and the wheel manufacturer.

In Season One the standard fitment to the Spark SRT_01E package was a cast-aluminium wheel. This was a typical specification of wheel for a fixed specification championship. While heavier than the minimum regulated weight, this was still a suitable fitment for the series. The opening of the regulations for Season Two allowed teams to exploit the wheel design for their own needs. In doing this there remained a few regulations that the wheel must meet. As there is the fixed specification Michelin tyre supply the wheels must be of a certain rim diameter and width to match the tyre sizes. Additionally, materials are limited, to maintain costs and deter huge expense on super-light materials like carbonfibre.  This effort to cap costs also extends to there being a minimum weight of the wheels, with 7kg front and 8kg rear defined by the regulations.  While the wheel must retain an open area of 50 per cent to prevent flush wheel faces to improve aerodynamics. Within this the teams can then set about finding a wheel partner and specifying a wheel design that meets their needs.

Kicking off this process is understanding what the teams’ priorities are, Renault e.dams Technical Director Vincent Gaillardot explains his team’s thinking: “There are a lot of parameters to be taken on board for a rim’s design: weight, intertia, stiffness, aerodynamics. So, you need to identify what are your first order parameters to improve your car performance”.

With these understood Gaillardot goes on to pick out two specific areas “obviously brake cooling is one of these parameters” and “weight is a must have in motorsport to ensure your car is at the minimum weight limit”.

Abt Schaeffler also explained its change in rim was for similar reasons: “The change of wheel was because the Season One rims were getting a little old and the concept now is for maximum brake cooling to keep the tyre cool”. Although Abt retains OZ, the same wheel supplier as Season One, the wheels are now lighter, to the tune of 500g per wheel, this soon adds up to a significant total weight saving of 2Kg.

Talking to Roger Griffiths of the Amlin Andretti team, the brake cooling aspect is also further explained… “As the FE car has no form of brake blanking, controlling temps is challenging, certainly wheel design can help make it more consistent. With the use of regenerative braking there are different braking problems to contend with at either end of the car”.

In saying this, Griffiths is pointing out that much of the braking effort is achieved with the front brakes, while the rear brakes of any race car typically are not worked as hard. When the car’s electric motor is recovering energy under braking the rear brake calipers are worked even less, allowing rear brake temperatures to drop. Using Motegi as its wheel supplier, Amlin Andretti was the first team to try a different wheel specification. Its wheels feature a trademark enclosed centre section, with the outer section more open between the spokes. This design helps keep heat in the brakes, by preventing the cooling air passing through the brakes escaping out the through the wheel spokes. In this guise, it will certainly help rear brake temperature, but as the design is common front to rear, this approach may not work for every team.

Indeed, speaking to some of the teams’ technical directors it’s clear the reasoning does vary between increased brake cooling or increased heat retention. Some of the teams were hesitant to explain as they are keen to keep their development arcs close to their chest. Although looking at the wheels, the design approach and its reasoning is evident from the open or closed wheel design. Typically, the more open the wheel design, the more the team wants to let heat escape from the brake, keeping it cool and preventing the transfer of heat into the wheel and raising tyre temperature. Only a few teams run more enclosed wheel designs, so their approach as demonstrated by the Amlin Andretti team, is to keep heat within the brakes, to ensure the brakes are warm enough for the next braking event, which may lead to running the tyres hotter too.

Another aspect of the wheel design is meeting the series’ low-emissions goals, the cars, team hardware and of course the wheels are shipped from one ePrix to another. Having a huge stock of wheels would add to the environmental impact of getting from one country to another, so teams run a slim stock of wheels. A straw poll among teams suggests that around 24 wheels per driver for the season is the standard. These are apportioned to the three sets of race wheels, a set for typhoon tyres, transport wheels and spares. Of course, we have seen the street racing nature of Formula E lead to a lot of car to wall contact!  So, stocks of spare wheels are held back at their base, one team reckoning they lose “one of two wheels every other race” so the wheel is very much a consumable item!

In conclusion, bringing in freedom on wheel design in an otherwise fixed chassis formula, Formula E has allowed the teams to bring in new partners to the series, saved up to 2Kg of weight and allowed them a set up variables on brake and tyre temperature. Who’d have thought the humble wheel would have had such an effect?