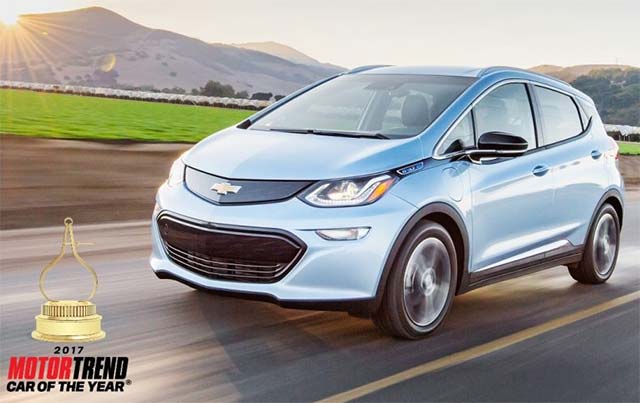 Motor Trend has recognized the Chevrolet Bolt EV as its 2017 Car of the Year.

The editors based their selection on the Bolt EV’s performance in six evaluation categories: advancement in design, engineering excellence, efficiency, safety, value and performance of intended function.

The magazine reviewed 23 new or significantly refreshed vehicles for Car of the Year and narrowed that to nine finalists and three podium finishers: the Bolt EV, Chrysler Pacifica and Volvo S90. Other finalists included the Audi A4, Cadillac CT6, Genesis G90, Jaguar XE, Porsche 911 and Tesla Model S 60/75.

The highly anticipated Chevrolet Bolt EV, which is due in showrooms by the end of the year, has an EPA-estimated 282 miles of driving range on a full charge. With prices starting at about $37,500 — or $30,000 after federal tax incentives — the Bolt EV is considered the first relatively inexpensive long-range electric vehicle.

“Chevrolet is the fastest-growing full-line retail brand in the industry thanks to an exceptional vehicle lineup, which includes ground-breaking products like the Bolt EV,” said Alan Batey, president of GM North America and Global Chevrolet brand chief. “Being recognized once again as Motor Trend Car of the Year is a great honor for the entire Chevrolet team.”

It is the fourth Motor Trend award for Chevrolet in three years, with the Camaro recognized as the 2016 Car of the Year and Colorado named the 2015 and 2016 Truck of the Year.

“Chevrolet is on a roll with new and compelling vehicles that have reset the bar for trucks in 2015, trucks and sports cars in 2016, and for 2017, electric cars,” said Ed Loh, Motor Trend Editor-in-Chief. “The Bolt EV is certainly a game changing vehicle and we look forward to seeing whether we’ll be recognizing another Chevrolet next year in our annual awards.”