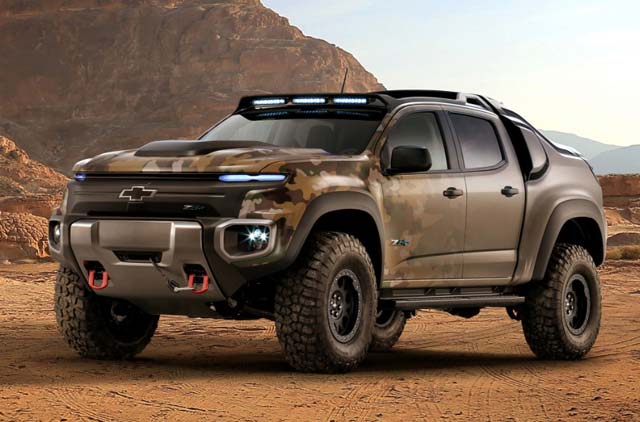 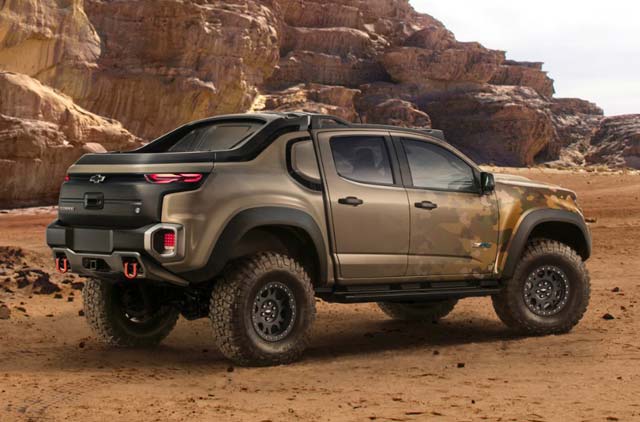 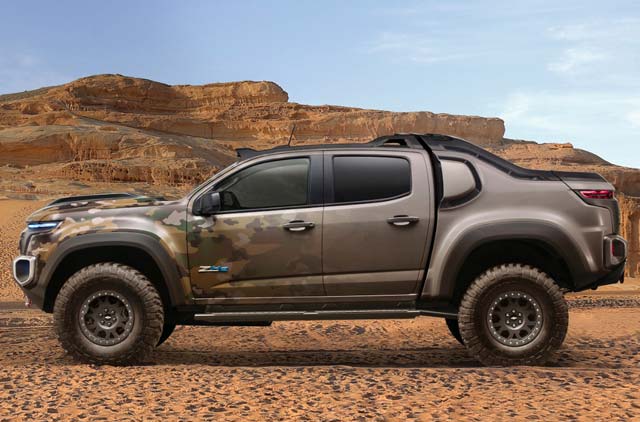 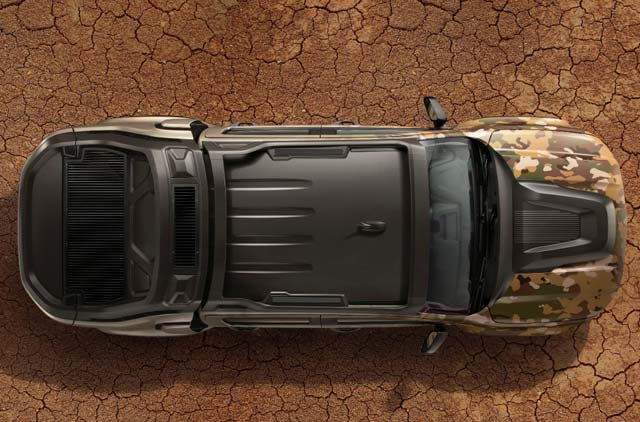 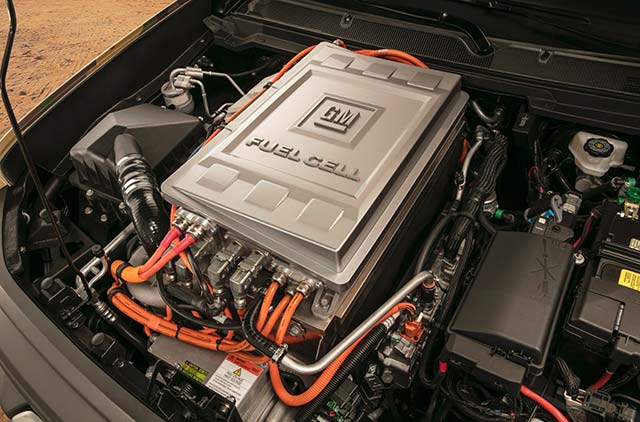 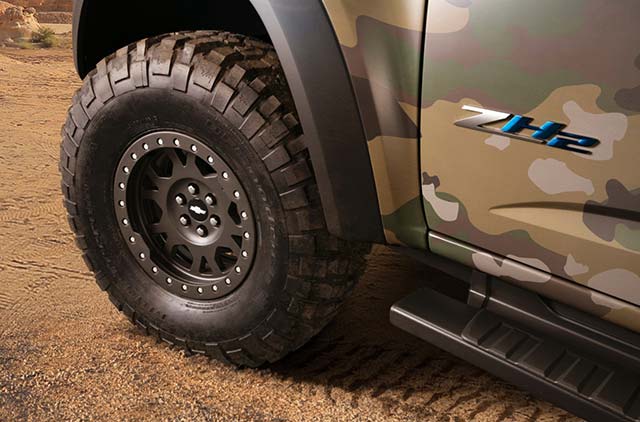 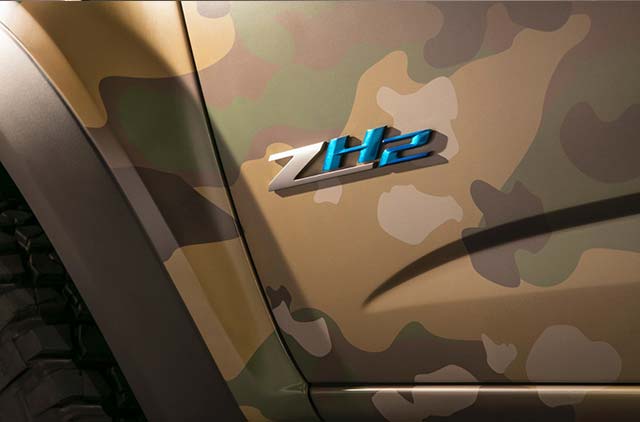 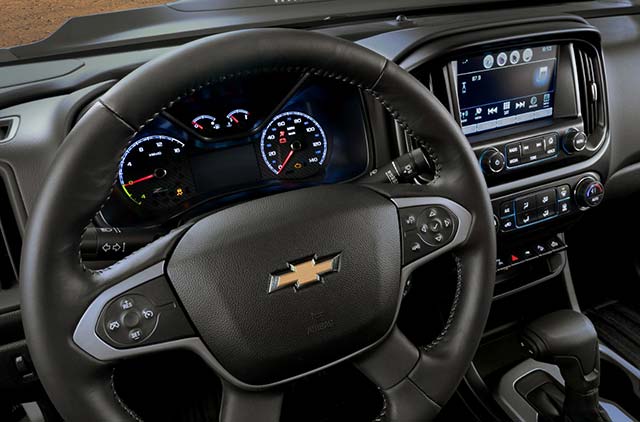 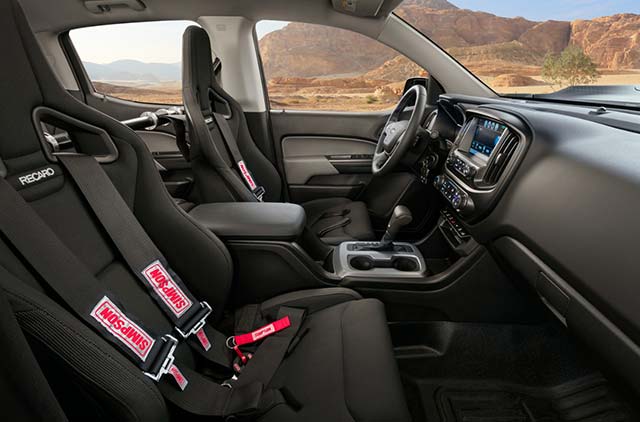 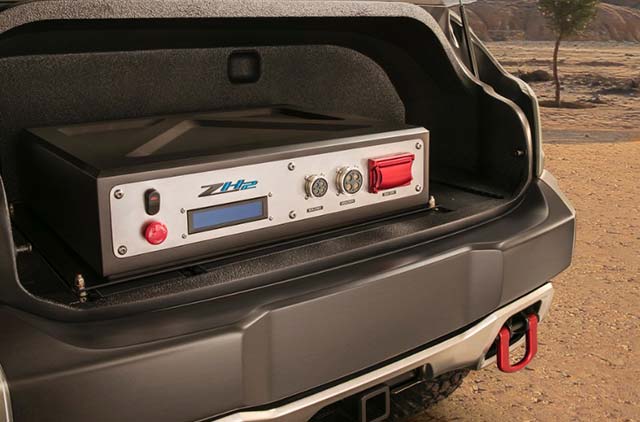 The physically imposing Chevrolet Colorado ZH2, the most extreme off-road-capable fuel-cell-powered electric vehicle ever from General Motors, was revealed at the fall meeting of the Association of the United States Army (AUSA).

Standing more than 6½ feet tall and more than seven feet wide, the Colorado ZH2 was built on a stretched midsize pickup chassis. Reinforced inside and out, the ZH2 rides on 37-inch tires and a specially modified suspension that helps the vehicle climb over and descend all manner of terrain.

The U.S. Army will test the Colorado ZH2 in extreme field conditions next year to determine the viability of hydrogen-powered vehicles on military missions.

The Colorado ZH2 features an Exportable Power Take-Off unit (EPTO) that allows the fuel cell to power activity away from the vehicle, such as remote locations where electric power may otherwise be unavailable.

GM and the U.S. Army Tank Automotive Research, Development and Engineering Center (TARDEC) collaborated to develop the Colorado ZH2 from contract to concept in less than a year.

GM is leveraging a range of advanced technologies for multiple applications, including military.

“The speed with which innovative ideas can be demonstrated and assessed is why relationships with industry are so important to the Army,” said Paul Rogers, director of TARDEC. “Fuel cells have the potential to expand the capabilities of Army vehicles significantly through quiet operation, exportable power and solid torque performance, all advances that drove us to investigate this technology further.”

The Army will evaluate the ZH2 fuel cell for:

GM and TARDEC have fuel cell development laboratories located 20 miles apart in southeast Michigan. Most of the Colorado ZH2 was assembled in GM’s Advanced Vehicle Integration facility in Warren. Calibration testing at GM’s Milford Proving Ground will continue into early 2017, when the vehicle will be turned over to the Army for a year of field testing.

The Colorado ZH2 contract is GM’s second vehicle development with a U.S military branch announced this year. In June, the U.S. Navy unveiled a GM fuel cell-powered Unmanned Undersea Vehicle (UUV) that is currently in pool testing before eventual deployment. The UUV leverages GM fuel cell technology common with the Colorado ZH2, demonstrating the flexibility to power a range of mobile and stationary devices.