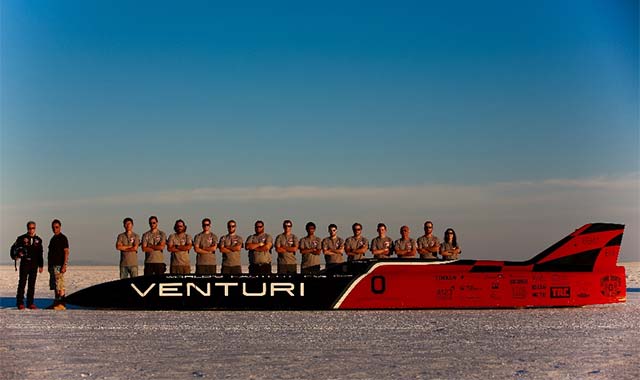 The LSR record is an average of two one mile miles in opposite directions with an hour between runs. The interval allows time for the battery and other components to cool down after a top speed event. Running the course in both directions cancels out any advantage from a tail wind.

There goes #VBB3 on the second leg of this morning’s record attempt. @venturi #BulletSuit pic.twitter.com/Tg2taD5a6I

With Roger Schroer (from the Transportation Research Center TRC, Ohio) behind the wheel, this is the 5th time in their history that Venturi reached with the Center For Automotive Research (The Ohio State University) this level of performance.

The new record was three years in coming. Crummy weather during the three previous years’ trials have kept speeds down. Built in the first half of 2013, this 3rd generation of Venturi VBB could have run in September 2013. Severe weather that hit Utah 3 years in a row led to the cancellation of record attempts.

For Venturi Automobiles the VBB program is a strategic approach and is a fantastic test for electric powertrain in harsh conditions and environments. This scope allows innovation in the fields of electric propulsion and energy efficiency one of the great challenges of the automotive industry. Each component of the vehicle was specifically studied, designed and built for that particular application that has no reference. For CAR it is an incomparable way to expose 25 young engineers to experience the realities of development applied to automotive technology and innovative methods of propulsion.