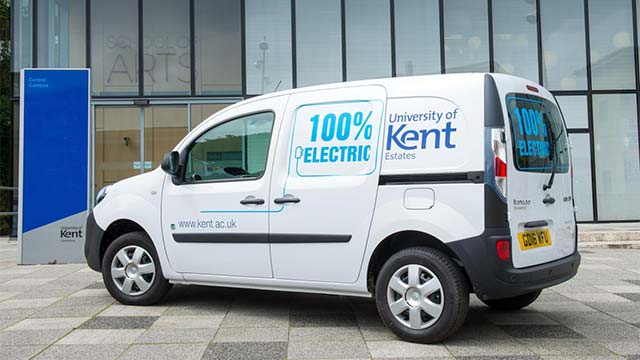 One of the UK’s leading academic institutions is using the 100 per cent electric Renault Kangoo Van Z.E to help educate its students on the importance of sustainability and the benefits of electric vehicles.

The University of Kent is employing the versatile LCV to transport its maintenance teams, furniture and recycling around the 300-acre grounds of its Canterbury campus. The highly visible use of the Renault Kangoo Van Z.E, coupled with a striking livery proclaiming the 100 per cent electric power, perfectly illustrates to students the advancements in electric vehicle technology and the university’s commitment to the environment.

In the latest development in its drive to meet the targets of its Carbon Trust Strategy, where it aims to lower its carbon emissions by 23 per cent by 2020, the University of Kent has added six further Renault Kangoo Van Z.E Panel Van versions to its fleet, taking its number of Renault Kangoo Van Z.Es to 15.

The university, which has recently celebrated its 50th anniversary, has been a long-term partner of Renault and supporter of the Kangoo Van Z.E. Its fleet also includes examples of the award-winning Renault Trafic and larger Renault Master, the University of Kent originally choosing Renault based on their value, emissions and locality of aftersales facilities.

The University of Kent’s latest Renault Kangoo Van Z.Es replace equivalent diesel Renault Kangoo Vans, after the learning centre chose to opt for Z.E variants when its conventionally-powered Kangoo Vans were due for change. All the vans feature the generously-equipped Business specification, which as standard includes DAB radio with Bluetooth and USB connectivity, remote central locking, multi-function computer, ABS with EBD (Electronic Brake force Distribution), full steel bulkhead and alarm. The University of Kent enhanced their vehicles with the addition of factory-fitted ply lining, the popular option involving no extra fixings to be drilled and providing protection from the variety of loads that the vans will carry in their day-to-day roles at the university.

At 625 kg, the Kangoo Z.E Panel Van has nearly the same 650 kg payload of diesel versions, while offering ultra-low running costs from only two pence per mile and being exempt from the Road Fund Licence – and Congestion Charge in central London.

Like all Renault LCVs, the Renault Kangoo Van Z.E comes complete with the reassurance of the manufacturer’s impressive 4-year/100,000-mile warranty and four years’ roadside assistance package.

Europe’s best-selling all-electric LCV and offering zero emissions in use, the Renault Kangoo Van Z.E is available in standard and longer ‘Maxi’ wheelbases. After the Government’s Plug-in Van Grant is applied, the Renault Kangoo Z.E costs from £13,146.48 ex. VAT.

For the UK market, the Renault Z.E offering also comprises of the innovative, two-seater Twizy urban vehicle, Twizy Cargo that has a load area of 180 litres and a useful 75 kg payload, and the multiple award-winning ZOE five-door supermini hatchback.