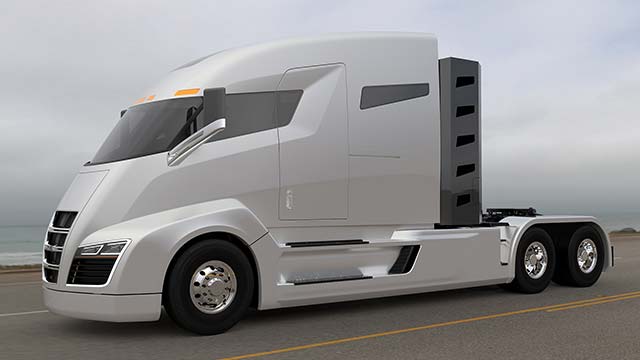 Nikola Motor Company, a Utah-based startup, announced Monday that its R&D team has achieved 100% zero emissions on the Nikola One commercial class 8 truck.

The company plans to unveil a running prototype of its Nikola One electric truck in Salt Lake City, Utah, on December 2.

The Nikola One’s electric motors are powered by a liquid cooled 320 kWh, lithium-ion battery pack (over 30,000 lithium cells), which is charged by a proprietary onboard Nikola Motor Company turbine. The turbine automatically charges the batteries when needed and eliminates the need to ever “plug-in”. The turbine produces nearly 400 kW of clean energy, which provides ample battery power to allow the Nikola One to climb a six percent grade at maximum weight at 65 mph.

A typical class 8 diesel truck under similar conditions would have a hard time reaching 35 mph. And going downhill, the Nikola One’s six electric motors absorb the braking energy normally lost and deliver it back to the batteries, increasing component life, miles per gallon, safety, and freight efficiencies while eliminating noisy engine brakes and reducing the potential for runaway trucks.

“While other companies have recently announced battery-powered semi-trucks, those trucks are restricted to a range of only a couple hundred miles and four to eight hours of charging between stops,” said Founder and CEO Trevor Milton. “Nikola has engineered the holy grail of the trucking industry. We are not aware of any zero emission truck in the world that can haul 80,000 pounds more than 1,000 miles and do it without stopping. The Nikola One requires only 15 minutes of downtime before heading out for the next 1,000 miles.”

“Imagine what this could do for the air in every city in America. We knew our emissions would be low, but to have the ability to achieve true zero emissions is revolutionary for the worldwide trucking industry,” Milton added.

When asked why no one had accomplished this before, Milton said, “It requires a specific zero emission refinement process of fuel and gutsy engineering and product execution. A traditional manufacturer would have to partner with an oil company, environmental group, electric vehicle engineering firm, a broad spectrum of suppliers and a world-class consulting firm to have figured it out. At Nikola, all of our development and talent is under one roof,” said Milton.

In addition to the zero emission semi-truck, Nikola has initiated the first steps to manufacture emission-free power plants that range from 50 kilowatts to 50 megawatts, cutting power generation costs in half.

Nikola believes this technology not only has the ability to transform America’s roadways, but how the world will migrate towards zero-emission energy going forward. Two months ago, Nikola announced more than $2.3 billion in reservations, totaling more than 7,000 truck reservations with deposits. The Nikola One truck leasing program costs $4000 to $5000 per month, depending on which truck configuration and options the customer chooses. The first million miles of fuel under the lease is included with each truck sale, potentially offsetting 100% of the monthly cost. An average diesel burns approximately $400,000 in fuel and can rack up over $100,000 in maintenance costs over 1,000,000 miles. These costs are eliminated with the Nikola One lease. Now companies can have a zero emission truck with a return on their investment in the first month.