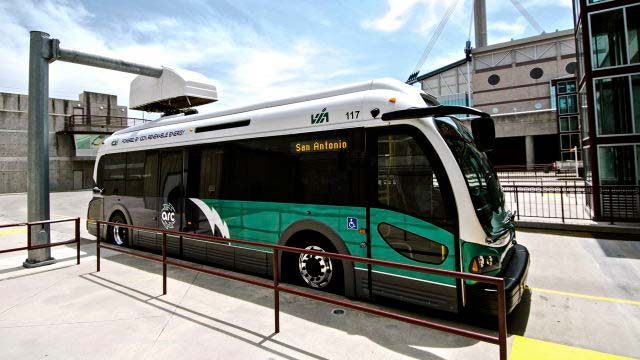 U.S. electric bus manufacturer Proterra announced it would be opening its overhead on-route fast-charging technology to the transit industry on a royalty-free basis.

With the recent issuance of foundational patents covering this technology, Proterra is now clear to offer a complete technology package to the market. Proterra will grant anyone royalty-free access to its patents covering its industry leading single-blade overhead charging design.

The Proterra charging stations use a robotic arm that lowers down to connect to the top of the bus for charging. The stations can be most conveniently located at bus terminals or at fueling yards where diesel-powered buses go to refill. The comparison of charging to filling times is interesting, as charging is faster.

“The interesting thing is that diesel buses have such massive fuel tanks — given how inefficient they are — that it takes longer to completely refill an 80- or 120-gallon diesel bus system than it does to recharge our electric vehicles,” said Proterra CEO Ryan Popple. “So we’re actually getting to the point where the vehicles that are configured for fast charge can be replenished faster than you can stick a hose in the side of a diesel bus and fill it with fuel.”

With more than 2.4 million miles of revenue service across the United States, Proterra has more battery-electric buses on the road today than any other manufacturer, and the Proterra single-blade overhead fast-charging system is the most utilized on-route charging technology in the industry.

Over the past five years, public transit agencies across the country have performed more than 250,000 charging events using the Proterra single-blade overhead fast-charge system, providing these agencies with the flexibility of keeping their buses on the road all-day, and seamlessly integrating electric buses with existing route schedules.

In order to meet the needs of transit operations, the single-blade vehicle coupling mechanism supports a charging voltage range of 250-1,000 volts DC, and can provide electrical current of up to 1400 amps, with safety taking the highest priority in these systems. That’s about eight times faster compared with the CHAdeMO fast-charging standard and three to four times faster compared with the Supercharger stations of Tesla Motors.

Popple said the fast-charging system can provide enough charging in ten minutes for a bus with a 100kWh battery to travel about 30 miles. If it has a circular route measuring less than that distance, or a terminal turn-around at the other end of its route not more than 30 miles away (which will often be the case), using electric power could be more convenient as well cleaner for the environment than diesel buses.

“At Proterra, we’re focused on designing and manufacturing the safest, highest-performing EV transit solutions on the market, but we’re also determined to enhance and expand the sector as a whole. We believe that everyone benefits from open platforms and greater customer choice,” Poople said. “We hope that this decision will encourage even more transit agencies to bring clean, quiet, emission-free vehicles to our city streets and community roadways.”