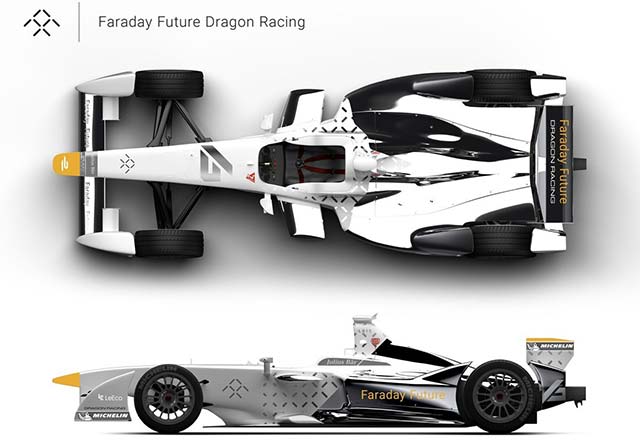 The new team name will be Faraday Future Dragon Racing, and the partnership will officially initiate at the beginning of Season 3 (2016/2017) at the Formula E Hong Kong ePrix on October 9, 2016.

Faraday Future and Dragon Racing will work together in Season 3 to develop key technology software solutions to maximize performance capabilities within the vehicles’ powertrains. Faraday Future’s R&D team will look for opportunities within the Dragon Racing platform to improve overall drivetrain performance. Additionally, they will refine data acquisition and analytics to improve vehicle simulation models, which will aid in more accurate predictions of vehicle performance and efficiency.

In the Season 4 (2017/2018) and beyond, Faraday Future and Dragon Racing will work together to implement various Faraday powertrain components, software, firmware, and other hardware as the team sees fit. This could include Faraday Future motors, gearbox, and the FF Echelon Inverter – the same inverter that will be installed into every future Faraday Future production vehicle.

While competing in the Formula E World Championship Series, FF technology will encounter some of the most challenging and strenuous conditions the world has to offer.

Since Faraday Future debuted at the Consumer Electronics Show (CES) earlier this year, it had been pursuing an avenue to enter into the series. After it emerged as the title sponsor for the 2016 Formula E Long Beach ePrix, Faraday pursued a path to compete through the Dragon Racing organization, who were among the first teams to commit to the promise of Formula E. Dragon Racing has demonstrated consistent performance throughout the first two seasons and has set the stage for a promising Season 3.