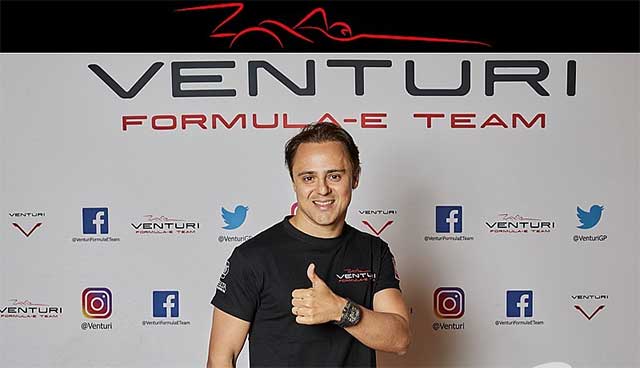 A year after calling time on his long and storied Formula One career, Brazilian racing driver Felipe Massa is returning to the track in Formula E.

Venturi Formula E announced that Filipe Massa will join the driver line up for Season 5 (2018-19), after signing a three-year deal with the team.

“I’m very happy to be joining the Venturi Formula E Team and the Formula E championship, which has become a magnificent competition in such a short space of time. For some years now, I’ve been clear about my interest in this innovative, forward-looking discipline that’s developing exponentially. I especially like the format of race meetings, the city-centre circuits and the contact with the fans. I can’t wait to take part in testing at the end of the month,” Massa commented.

After attending the Race in Rome earlier this season, Massa was keen to show his commitment to the series. “It would be a great pleasure to be here racing,” said the Brazilian driver earlier in the season during the race in Rome. “I can not stay at home for very long – I need to find something to do and Formula E is a championship that’s showing some good possibilities.”

Starting out in go-karts from the age of eight, Massa continued racing in national and regional championships for seven years, before moving to Formula Renault and on to Formula 3000, where he won the championship.

“It’s an honour to welcome Felipe to the Venturi family,” said Gildo Pastor, President of Venturi Automobiles and the Venturi Formula E Team. “I needed him, his experience, his speed, and his openness. Formula E is extremely complex to set up and drive. Even more so than in other disciplines, teamwork between the driver and the engineering team is one of the keys to success. Felipe’s 15 years’ experience in Formula 1 will definitely give us a boost. And with his humble nature, I know he will listen to the team and master the discipline quickly.”